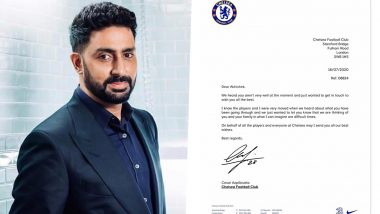 Bollywood star Abhishek Bachchan is fighting from the COVID-19 and recovery wishes are pouring in for him from all around the world. In fact, English Football club Chelsea also wrote a letter to the veteran actor, wishing for his speedy recovery. The letter was written by none other than Chelsea’s captain Cesar Azpilicueta who says that many players of the club were ‘moved’ after getting the news and are praying for the good health of the actor. Sharing the letter on Instagram, the Manmarziyaan actor thanked The Blues for their gesture and also expressed the desire of seeing Chelsea lifting the FA Cup 2020 title by defeating Arsenal in the finals. Abhishek Bachchan Shares a Hopeful Post from COVID-19 Isolation Ward.

“This made my week. Thank you so much @chelseafc The only thing that would top this is winning the FA Cup this evening. Come on Chelsea!!! #ktbffh @cesarazpi,” wrote the 44-year-old while sharing the letter on the picture-sharing website. There’s no secret behind the fact that the Dhoom star is an ardent fan of the Chelsea and is even close to many players of the club including the skipper Azpilicueta. Arsenal vs Chelsea, FA Cup 2019-20: Pierre-Emerick Aubameyang, Olivier Giroud And Other Players to Watch Out for.

This made my week. Thank you so much @chelseafc The only thing that would top this is winning the FA Cup this evening. Come on Chelsea!!! #ktbffh @cesarazpi

As of now, Abhishek is still admitted in hospital with father Amitabh while his wife Aishwarya Rai and daughter Aaradhya, who are also diagnoses with COVID-19 virus, were discharged last week. The father-son duo has shown good progress in recent times and is expected to recover soon.

Speaking of Chelsea, Frank Lampard’s men have been in great form in recent times and will look to extend their sensational run in the final encounter too. However, they are up against Arsenal, who stunned Manchester City by 2-0 in the semi-finals. Hence, football fans must brace themselves for a great contest.

(The above story first appeared on LatestLY on Aug 01, 2020 04:25 PM IST. For more news and updates on politics, world, sports, entertainment and lifestyle, log on to our website latestly.com).