SC East Bengal Squad Profile: A Look Into Strengths, Weaknesses and Key Players for the Red and Gold Brigade in ISL 2021-22

Having played out a 1-1 draw against Jamshedpur FC in their first match. SC East Bengal would go all out against city rivals ATK Mohun Bagan in the Kolkata derby on Saturday, November 27. The Red and Gold Brigade performed poorly last season, finishing ninth on the points table. 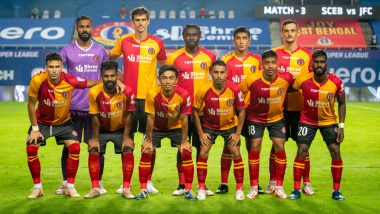 After a horrible debut season in the Indian Super League, SC East Bengal would be keen on having a new start to life in India's top-tier football competition in the 2021-22 season. The Red and Gold Brigade, led by Robbie Fowler last season failed to make any real impact as they were expected to, being one of India's oldest and heavyweight sides. They ended ninth in the 11-team table with 17 points from 20 matches. However, this time, they would look to finish higher in the table and also mount a title challenge, which would do justice to their reputation as a 'giant' in Indian club football. The club released all their foreign signings from last season, hired a new coach and invested in new players, who they would bank on to make a difference for them. Also with a good Indian contingent, SC East Bengal aim to do well this time. ATK Mohun Bagan Squad Profile: A Look Into Strengths, Weaknesses and Key Players for the Mariners in ISL 2021-22

One of their biggest areas of strength is the foreign contingent. The club roped in the likes of Amir Dervisevic, Franjo Prce and Daniel Chima Chukwu all of whom are expected to play a big part in their campaign. Dervisevic, with his experience, would aim at being the midfield marshall for his side. He would mainly set up goals for Nigerian striker Chima Chukwu, who is to be entrusted with the goalscoring responsibilities. The club also has a decent Indian contingent with their best domestic player being captain Arindam Bhattacharya. It was indeed very smart business on part of the Red and Gold Brigade to secure the signature of Bhattacharya, who won the Golden Glove last season with ATK Mohun Bagan. He would be a commanding presence at the back with the experience of a defender like Adil Khan ahead of him. East Bengal vs ATK Mohun Bagan, ISL 2021-22: 5 Players to Watch Out for in Kolkata Derby

Also Franjo Prce can prove to be a solid defender as well. The centre-back scored for the club in their opening match against Jamshedpur FC and would aim to contribute more to the team's cause.

One of the major weaknesses for SC East Bengal would be the lack of creativity. Although a lot would rest on Dervisevic, an injury to the Slovenian could expose the midfield and that would not be good especially in a competition as intense as this. Also, Balwant Singh, who would lead the attack as the first-choice Indian striker, did not have a good time last season. He would aim to spark a turnaround in his form and find some goals this time around.

Amir Dervisevic is definitely one of the players to watch out for in SC East Bengal's squad. His performance would be crucial in determining where the Kolkata franchise end up finishing. Also, they would have the youthful exuberance of a talented Indian midfielder in Amarjit Singh Kiyam. The youngster is promising and would aim to play a solid role alongside Dervisevic in the midfield. Captain Arindam Bhattacharya would aim to replicate the success he had with SC East Bengal's archrival club ATK Mohun Bagan. He did well in the first match against Jamshedpur FC to help his side, walk away with one point.

After parting ways with Robbie Fowler, SC East Bengal roped in Manolo Diaz as their new head coach. Diaz is a former Real Madrid Castilla coach and one of his main philosophies would be possession-based football. It would be interesting to see the tactics he uses with SC East Bengal this season as they are seeking a strong performance in the ISL this season.

Next match: SC East Bengal's next match is against archrivals ATK Mohun Bagan. Defeating them would not be easy but certainly would be something that would give this side a huge boost.

(The above story first appeared on LatestLY on Nov 26, 2021 12:42 AM IST. For more news and updates on politics, world, sports, entertainment and lifestyle, log on to our website latestly.com).