SC East Bengal vs ATK Mohun Bagan, match in ISL 2021-22 will be played at the Tilak Maidan in Vasco da Gama, Goa. The match will take place on November 27, 2021 (Saturday) and it is scheduled to begin at 07:30 pm IST (Indian Standard Time). 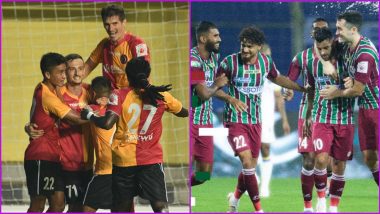 East Bengal take on ATK Mohun Bagan in the first Kolkata Derby of the Indian Super League which is expected to be a thriller. The two sides are often considered the flag bearers of Indian football and there is no rivalry that matches that of theirs. ATK Mohun Bagan start the game third in the standings with a win over Kerala Blasters while East Bengal could only manage a draw against Jamshedpur FC.  The latter though will be happy with the performance given the kind of display Jamshedpur have put so far. If we talk about the attacking flair, ATK Mohun Bagan certainly hold the edge over the city rivals. But we never know how a derby pans out considering the players are all charged up. SC East Bengal vs ATK Mohun Bagan, ISL 2021–22: A Look at History and Some Facts About the Iconic Kolkata Derby

Two time ISL winning coach Antonio Habas was left dissatisfied despite winning the game against Kerala Blasters. The Spaniard has demanded more intensity from his team and that means ATK’s midfield with Lenny Rodrigues in particular can ill afford to drop their guards. Hugo Boumous scored twice in the last game and already looks like a great addition to this team. His combinational play with Roy Krishna can decide the outcome of the match in ATK’s favour.

Croatian striker Antonio Perosevic  will lead the attack for East Bengal with Daniel Chukwu as his striker partner in an attacking 4-4-2 formation. Saurav Das and Wahengbam Angousana in midfield make up for a dynamic pairing. Franjo Prce at the heart of the East Bengal defence should expect a tough day at work with ATK boasting of a wonderful attack. SC East Bengal vs ATK Mohun Bagan, ISL 2021–22: Ahead of Kolkata Derby, Take a Look at Last Five Meetings Between the Two Giants

SC East Bengal vs ATK Mohun Bagan, match in ISL 2021-22 will be played at the Tilak Maidan in Vasco da Gama, Goa. The match will take place on November 27, 2021 (Saturday) and it is scheduled to begin at 07:30 pm IST (Indian Standard Time).

Fans can also watch SC East Bengal vs ATK Mohun Bagan match online. Since Star Sports network is the official broadcaster of ISL 2021-22, Disney+Hotstar will be live streaming the SCEB vs ATKMB clash online for fans. JIO and Airtel subscribers can also follow the match on JIO TV and XStream. ATK Mohun Bagan certainly look the stronger of the two teams on paper but the game looks likely to end in a scored draw.

(The above story first appeared on LatestLY on Nov 27, 2021 01:43 PM IST. For more news and updates on politics, world, sports, entertainment and lifestyle, log on to our website latestly.com).