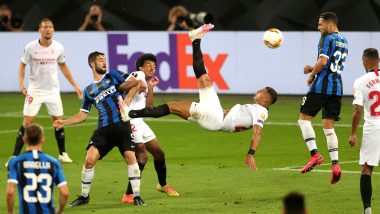 Sevilla beat Inter Milan 3-2 to win their sixth Europa League title with Romelu Lukaku netting the decisive goal to gift the Spanish side the win in EUL 2019-20. Lukakau opened the scoring and will, unfortunately, have his name as the scorer of the goal that proved decisive to hand Sevilla their sixth Europa League crown. The La Liga side has now won each other six final appearances in the Europa League. Inter, who won their last trophy in 2011, will now stretch into a decade of a barren trophyless run. They had come into the final after thrashing Shakhtar Donetsk 5-0 in the semis but managed just shots on target in the final. Alexis Sanchez Brutally Trolled Online for Another Trophyless Campaign After Inter Milan’s 3–2 Defeat Against Sevilla in UEFA Europa League 2019–20 Final.

Inter were certainly the favourites heading into the final with the lethal partnership of Lautaro Martinez and Lukaku predicted to be too heavy for Sevilla to hold back. Glimpses of what a night it could be for the Spanish side was seen within the opening five minutes when Romelu Lukaku ran past Diego Carlos and clear on goal from a Nicolo Barella through ball.

The Brazilian fouled Lukaku and Inter had a penalty from which the Belgian scored and went level with Ronaldo Nazario for most goals in a debut season for Inter Milan. Both have now scored 34 goals each in their first season at San Siro. Lukaku also equalled Cristiano Ronaldo’s record of scoring in six consecutive European matches.

Romelu Lukaku Puts Inter Ahead From the Spot

Romelu Lukaku scores and is now equal with Ronaldo’s record who scored 34 goals in his debut season with Inter.

What a season for him! 😍⚽#UCLfinal#SEVINT

Inter’s lead, however, didn’t last long enough. Sevilla, who came back after conceding penalties against both Wolves and Manchester United in the previous two rounds, showed they could do it again for the third time. Dutch striker Luuk de Jong equalised with a sensational header 12 minutes later. The 29-year-old forward got to the end of a brilliant low cross from Jesus Navas to head back into the contest.

De Jong had a second 21 minutes later and after falling behind within the opening five minutes, Sevilla were suddenly 2-1 ahead in the 33rd minutes. Like the equaliser, De Jong’s second goal was a header too but of a different strike. The Dutchman headed in Ever Banega’s free-kick into the corner of the second post far from Inter goalkeeper Samir Handanovic.

But like Inter, Sevilla’s lead too didn’t last long as Diego Godin rocketed in a header just two minutes after falling 1-2 behind. Godin’ header, unlike De Jong, was less placement and full of power, brute power. The Uruguayan centre-back, winner of the competition with Atletico Madrid in 2018, pulled Inter back after being at fault for both of Sevilla’s goals.

Diego Godin Rockets a Header to Level the Scores

Both sides headed into the second half tied at 1-1 and although the match looked to be heading into extra-time, Inter were clearly the favourites with Sevilla players suffering cramps and battling hamstring pulls. This was until Lukaku scored again but into his own net. Jesus Navas was fouled 25 yards out outside his own box and Banega sent in another dead ball which was only half-cleared. Diego Carlos, who had conceded the penalty, rose high and struck with an overhead kick which looked off-target until Lukaku laid the final touch to make 3-2 to Sevilla.

Sevilla lifted their sixth Europa League crown and celebrations ensued with players erupting in tears of joy. For Inter, it was another trophyless campaign and their dry run will now stretch into the decade when the next season begins. For Julen Lopetegui it was redemption and pure raw joy.

(The above story first appeared on LatestLY on Aug 22, 2020 10:51 AM IST. For more news and updates on politics, world, sports, entertainment and lifestyle, log on to our website latestly.com).