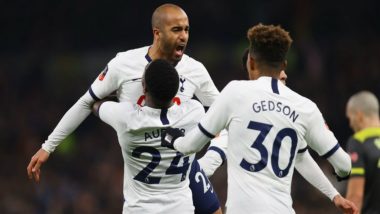 Results have not gone Sheffield’s way since football’s restart from the coronavirus enforced break. Chris Wilder’s men are winless in the last four games, losing three of them while registering just one goal in the process. Dreaming of Champions League at one stage, the Blades have now fallen completely out of European spots with such a poor run and need to get a win today to get themselves back on track. Chasing Liverpool, Manchester City Requires Lot of Hard Work, Says Chelsea Manager Frank Lampard.

Meanwhile, Jose Mourinho’s men have started in a positive manner since the league’s resumption. Spurs are also involved the race for Europe and with UCL qualification looking out of reach, the North-Londoner’s will be hoping to push for Europa League places.

The Premier League clash between Sheffield United and Tottenham Hotspur will be played at the Bramall on July 2, 2020 (Thursday). The game has a scheduled time of 10:30 pm IST.

(The above story first appeared on LatestLY on Jul 02, 2020 07:34 PM IST. For more news and updates on politics, world, sports, entertainment and lifestyle, log on to our website latestly.com).