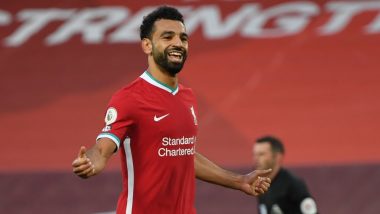 Mohamed Salah gives an incredible start to the Liverpool by scoring a hat-trick and thus leading Liverpool to a 4-3 win over Leeds United during their first match of the EPL 2020 -21. Thus Salah became the first Liverpool player to score a hat-trick on the opening day of the Premier League. The Liverpool forward now has 97 goals in 154 games for Liverpool. Right from the start of the match, Liverpool looked in complete form as Salah netted an early goal at the fourth minute of the match as he converted a penalty into a goal. Jack Harrison scored an equaliser at the 12th minute of the match. Premier League 2020: Mohamed Salah's Hat-Trick Guides Liverpool to Victory Over Leeds United.

Patrick Bamford from Leeds United gave a lead to the team as he scored yet another goal. Salah netted his second goal of the match at the 33rd minute of the match and at the 88th minute of the game, he once again converted a penalty into a goal. So Salah's hat-trick came in after he converted a couple of penalities into a goal.  Even the commentators who were watching the match couldn't believe their eyes. “Are watching a computer game here?!” Jamie Carragher, commentating for Sky Sports, had asked during the first half.

The last goal from Liverpool's side came in from Virgil van Dijk as and took them 4-2. At the 66th minute of the match, Leeds United did score a goal but that wasn't enough for the team to win the game. The netizens shared the video of the goal by Salah. Check it out below:

With this, the EPL 2019-20 champs have kept up with their winning streak. Salah was obviously declared as the Man of the Match for the game. Even the official account of Liverpool hailed Salah for the hat-trick.

(The above story first appeared on LatestLY on Sep 13, 2020 10:43 AM IST. For more news and updates on politics, world, sports, entertainment and lifestyle, log on to our website latestly.com).