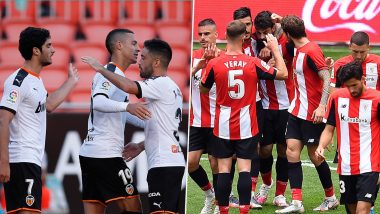 Valencia will host Athletic Bilbao in the latest La Liga 2019-20 fixture. The match will be played at the Mestalla Stadium on July 1, 2020 (Wednesday). Both teams are chasing Europa League qualification for next season and a win today will do well for either side’s chances of achieving that target. Meanwhile, fans searching for live streaming details of Valencia vs Athletic Bilbao clash in La Liga can scroll down below for more details. Lionel Messi Scores 700th Career Goal During Barcelona vs Atletico Madrid 2–2 La Liga 2019–20 Draw, Twitterati Hail the Argentine on Incredible Achievement (Watch Video).

Valencia have received a major boost ahead of the clash as Frenchman Kevin Gameiro is back fit and could replace Rodrigo Moreno in the starting line-up. Eliaquim Mangala is available after missing the last game due to suspension but the hosts will be without the services of Jose Gaya as the Spaniard will be out due to injury. Bilbao, on the other hand, have no fresh injury concerns and manager Garitano is expected to opt for the same line as last time around.

Valencia are on a disappointing run since football’s return from coronavirus enforced suspension and have just one of their five games so far. Meanwhile, Bilbao have lost just once in last five games, which also includes a draw against Atletico Madrid at Wanda Metropolitano.

Unfortunately, there are no official broadcasters of La Liga 2019-20 in India. So fans will be unable to catch the live action of Valencia vs Athletic Bilbao on TV.

How to Get Free Live Streaming of Valencia vs Athletic Bilbao, La Liga 2019-20 Football Match?

Valencia vs Athletic Bilbao game will be streamed live on the official Facebook page of La Liga. So fans from India can tune into La Liga’s FB page to catch the live-action.

(The above story first appeared on LatestLY on Jul 01, 2020 05:30 PM IST. For more news and updates on politics, world, sports, entertainment and lifestyle, log on to our website latestly.com).