FC Goa co-owner Virat Kohli launched the Forca Goa Foundation ahead of the team's last home game of the league stage of the Hero Indian Super League (ISL) against ATK at the Jawaharlal Nehru Stadium in Fatorda. 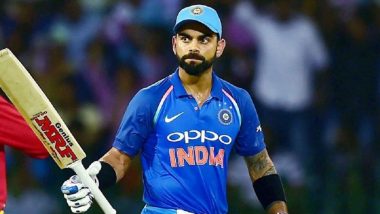 Panjim (Goa), Mar. 1: FC Goa co-owner Virat Kohli launched the Forca Goa Foundation ahead of the team's last home game of the league stage of the Hero Indian Super League (ISL) against ATK at the Jawaharlal Nehru Stadium in Fatorda.

Forca Goa Foundation is a multi-programme NGO that provides grassroots training to children and uses football as a vehicle for positive development in the state.

The Indian skipper attended the match as a show of support for the Gaurs as well as to extend his support to the launch of the foundation. On the occasion, he also unveiled the special edition FC Goa jersey that the team has chosen to adopt at the match against ATK to show their solidarity with the Forca Goa Foundation's mission of a better future for Goa.

The Gaurs will steer away from their traditional blue home kit and will sport a brand new jersey with the brand colours and logo of its sister organisation for the last home game of the league stage against ATK. The idea behind the change in the jersey colour and design is also to generate awareness about the foundation amongst spectators and fans.

The Forca Goa Foundation aims to use the common culture of Football to bring the community together, and by empowering the community, they aim to bring about positive change in Goa to co-create a more sustainable future.

"The change in jersey is a symbolic representation of the whole club showing our solidarity and pledging our continued support to creating a robust ecosystem for football. Goa is one of the biggest football hubs in the country.

The Forca Goa Foundation's main aim is to use this sport that we all love, to help the community and society at large to work together, in order to build a better future for the next few generations. Additionally, with the help of the foundation, we hope to inspire more children, irrespective of gender to take up the sport and train and groom them into thorough professionals," said Virat Kohli.

"The Forca Goa Foundation is incredibly grateful to have a sister organisation like FC Goa, a club with a vision for the future that believes in investing in the youth. Currently, we have nine home-grown players in the first team squad, and I believe through the efforts of the Foundation's holistic grassroots programmes we will be able to increase that number over time. I believe that together both FC Goa and the Forca Goa Foundation, with the support of our community, can make a lasting difference in the lives of young Goans," added Jill Ferguson, MD, Forca Goa Foundation.