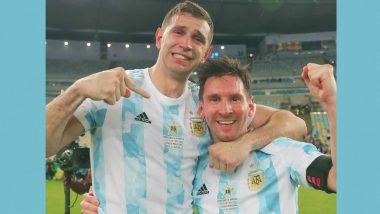 Argentina and Aston Villa goalkeeper Emiliano Martinez opened up on winning the Copa America 2021 title with Lionel Messi. The duo played crucial roles in Argentina's ascendancy to South American supremacy as they defeated Brazil 1-0 in the final on July 11 to win a first international title in 28 years. Martinez was rock solid at the back with four clean sheets and conceding just three goals  and saved three penalties in the semi-final against Colombia. Rightfully, he was awarded the Golden Glove for his performances. As a matter of fact, Messi also praised the gloveman for his efforts throughout the competition and even called him 'a phenomenon' in a social media post. Emiliano Martinez Trash-Talks and Celebrates After Saving Penalty vs Colombia During Copa America 2021 (Watch Video)

Reacting to it, he said, "That he posts a photo with the caption 'he’s a phenomenon', how can I not perform in a final? "I want to give him life, I want to die for him." The Villa goalkeeper, who had a good season in the Premier League and was called up to the national squad as a result, further stated that playing alongside Messi in one team made him a better player. "You want to play with the best player in the world and watching him play made me secure and made me better. You say 'he made the players excited' - me too, and I’m a goalkeeper. I wish I had played every match in a league with him. I would be a much better goalkeeper. "I was with the national team for 45 days having come off a great season with Aston Villa where I got much better but with the national team, I got better by 10% or 15%," Martinez added.

The 28-year old also revealed instances from the tournament where Messi gave him advices during the matches. "In general, he says more things as a captain, he helps us all. When he scored his penalty (in the semi-final), he could have gone straight to the centre but he came and told me: “You’ll save one” - and I saved the next one. That’s what he generates. It’s difficult to explain but he’s a captain and the entire world wants to have him.”

(The above story first appeared on LatestLY on Jul 19, 2021 08:05 PM IST. For more news and updates on politics, world, sports, entertainment and lifestyle, log on to our website latestly.com).