The Argentina vs Brazil football game will be played at the Estadio San Juan del Bicentenario. The match is part of the 2022 FIFA World Cup Qualifiers CONMEBOL. 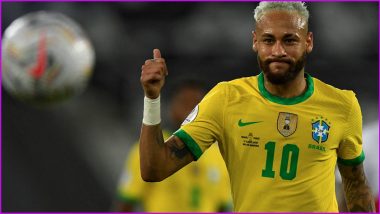 Argentina takes on Brazil in the 2022 FIFA World Cup Qualifiers. The football game will be played at the Estadio San Juan del Bicentenario. While Argentina have confirmed that Lionel Messi will take part in the game Brazil will be without the services of star player Neymar. Brazilian Football Confederation (CBF) have confirmed that Neymar will not travel with the team. Argentina vs Brazil Live Streaming Online 2022 FIFA World Cup Qualifiers CONMEBOL: Get Free Live Telecast of Football Match With Time in IST.

"Neymar Jr said he felt insecure about the situation and, as there is not enough time to carry out complementary exams, the technical commission decided to rest the player who will not travel with the team," a CBF statement read. Will Lionel Messi Play in Argentina vs Brazil? Check Possibility of Star Footballer Featuring in Playing XI of 2022 FIFA World Cup Qualifiers CONMEBOL Match

Brazil will also be missing Casemiro besides Neymar and there is a possibility that Fabinho will replace the suspended player. It will be interesting to see what sort of combination Brazil opt for after beating Colombia 1-0 in their previous game.

(The above story first appeared on LatestLY on Nov 16, 2021 07:18 PM IST. For more news and updates on politics, world, sports, entertainment and lifestyle, log on to our website latestly.com).