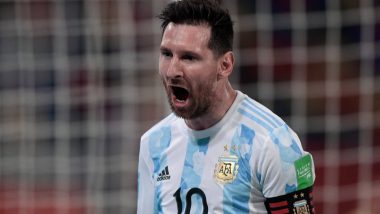 South American stalwarts Brazil and Argentina meet in the CONMEBOL World Cup qualifiers with the former already assured of passage to the next round. Often dubbed as the mother of all battles in international football, both these teams boasts of a plethora of star players. The last time they met in the qualifiers, the game had to be abandoned due to the interference of the Brazilian government over following of the coronavirus guidelines. Hosts Argentina have been undefeated since 2019 and most notably won the Copa America 2021 defeating Brazil in their own backyard. Although the Selecao lead the home team by 6 points in the points table, the gulf in quality is barely minimal. Will Lionel Messi Play in Argentina vs Brazil? Check Possibility of Star Footballer Featuring in Playing XI of 2022 FIFA World Cup Qualifiers CONMEBOL Match

Lionel Messi is expected to start for Argentina after being on the bench against Uruguay. The talismanic footballer has been struggling with some fitness issues off late but manager Lionel Scaloni has confirmed the PSG man is fit again and available. Paulo Dybala and Lautaro Martinez upfront Rodrigo de Paul and Leandro Paredes in midfield have a tough job ahead of them as they come against one of the best teams in the world in terms of passing.

Brazil have a problem with the unavailability of Neymar who is suffering from a thigh strain. The likes of Casemiro and Marquinhos will start though adding solidity to this team. Manchester United’s Fred who has not had the best of seasons so far with his club also looks set to start. Lucas Paqueta scored for Brazil against Colombia and his combination play with Real Madrid’s Vinicius Jr would be crucial for the visitors in absence of Neymar.

Unfortunately, Argentina vs Brazil match will not be telecast live in India as there are no official broadcasters available for the 2022 FIFA World Cup CONMEBOL qualifiers in India. Fans will therefore not be able to catch the live action of the CONMEBOL match on their television sets.

Since there are no official broadcasters available for the 2022 FIFA World Cup CONMEBOL qualifiers in India, fans will also not be able to watch Argentina vs Brazil match online. But fans can always follow the match on social media handles of both teams. Brazil face the toughest test yet in the World Cup qualifiers and there is a general feeling that the visitors may face their first defeat of the campaign.

(The above story first appeared on LatestLY on Nov 16, 2021 06:11 PM IST. For more news and updates on politics, world, sports, entertainment and lifestyle, log on to our website latestly.com).