Zenit had lost the match when they faced Chelsea earlier in the Champions League this season. A header from striker Romelu Lukaku was enough to separate the two teams as the Russian side would now drop down to the Europa League. 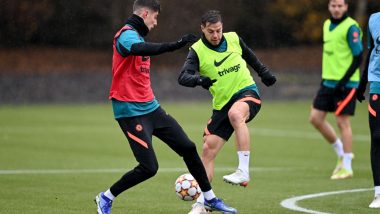 Chelsea would be taking on Zenit in their final Group H game in the UEFA Champions League 2021-22 clash at the Gazprom Arena on Wednesday, December 8. The match would be played at 11:15 pm IST. Chelsea have already booked their place in the last 16 round of the Champions League and they can take this match as a preparatory clash to get back the winning momentum after suffering a shock defeat to West Ham in the Premier League. They would nonetheless be without midfielder Mateo Kovacic with the midfielder testing positive for COVID-19. Zenit on the other hand, are already out of the last 16 race and they can, at best, damage Chelsea's confidence more and stop them from finishing on top of the group (depending on the Malmo vs Juventus result). Manchester United Relives Cristiano Ronaldo & Jadon Sancho's Goal Ahead of Their UCL 2021-22 Match Against Young Boys (Watch Video)

Despite suffering a blip in form, Chelsea are expected to bounce back and win this game comfortably, thereby topping Group H. Here are the live streaming details of this match.

The Zenit vs Chelsea clash in UEFA Champions League 2021-22 will be played at Gazprom Arena in Saint Petersburg, on December 8, 2021 (Wednesday). The game has a scheduled time of 11:15 PM IST (Indian Standard Time).

Where To Watch Live Telecast of Zenit vs Chelsea, UEFA Champions League 2021-22 Match on TV?

Sony Pictures Network are the official broadcasters of UEFA Champions League 2021-22 in India and will telecast the games live on its channels. Fans can tune into Sony Sports HD/SD channels to watch the live telecast of Zenit vs Chelsea on TV.

Sony Pictures Network’s official OTT platform Sony LIV will be streaming the game live for its fans in India. You can tune into the Sony Liv app or website to watch Zenit vs Chelsea, UEFA Champions League 2021-22 live streaming online. JioTV would also provide live streaming for this match.

(The above story first appeared on LatestLY on Dec 08, 2021 04:12 PM IST. For more news and updates on politics, world, sports, entertainment and lifestyle, log on to our website latestly.com).