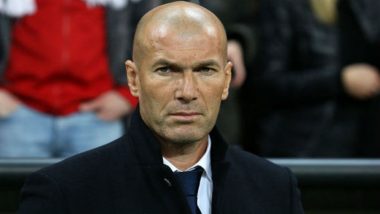 Real Madrid extended their sensational run in the La Liga 2019-20 as they defeated Athletic Bilbao by 1-0 in their last encounter. This was Los Blancos’ seventh straight triumph in the ongoing tournament courtesy which they have tightened their grip at the pinnacle of the team standings. After the match, however, Real Madrid manager Zinedine Zidane expressed his displeasure over the rumours suggesting that the referees are favouring his team. The 48-year-old said that his side Real Madrid have been doing exceptionally well and they deserve respect instead of ‘unfair ‘criticism. Sergio Ramos Goal Steers Real Madrid Seven Points Clear With 1-0 Win Over Athletic Bilbao.

Sergio Ramo struck the only goal during Real Madrid’s encounter against Athletic Bilbao. However, it came through a penalty which the visitors got following a Video Assistant Referee (VAR) review. The referral suggested that Marcelo has been fouled by Dani Garcia. Also, Athletic were denied a penalty kick when Ramos appeared to tread on their forward Raul Garcia.

Well, the decisions during the game raised many eyebrows of the fans. However, Zidane rubbished all the claims and credited good performance for Real Madrid’s success. “It’s easy to ... talk about controversies but that’s not the case, we are doing phenomenally well. We are giving everything on the pitch and we deserve everything we are achieving,” Zidane told a virtual news conference.

“I don’t like to get involved in these discussions but what I cannot accept is hearing that we are top of the table because of referees’ decisions. We deserve more respect for what we are doing and I’m tired of people saying we are winning because of referees,” he added.

Real Madrid are scheduled to play four more matches in the ongoing league. They, however, are four points ahead of second-placed Barcelona and will look to maintain or even extend the gap till the end of the tournament in order to lift the title.

(The above story first appeared on LatestLY on Jul 06, 2020 09:25 AM IST. For more news and updates on politics, world, sports, entertainment and lifestyle, log on to our website latestly.com).