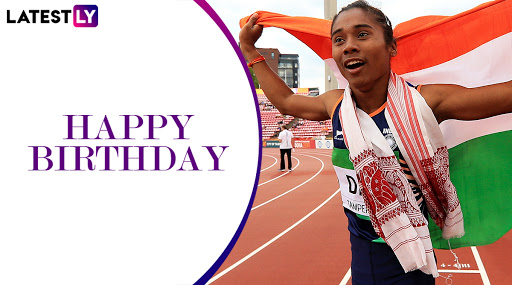 India’s sprint sensation Hima Das will celebrate her 20th birthday on Thursday (January 9, 2020). Born in Dhing – a town in the state of Assam – Das is nicknamed as the Dhing Express. The youngster has taken athletics in India to unimaginable heights due to her recent success all over the world. Hima Das holds the current Indian national record in 400 metres with a time of 50.79 seconds, a feat she achieved during the 2018 Asian Games in Jakarta. So on the occasion of the Dhing Express’ birthday, we take a look at some of her greatest achievements. Hima Das Appoint as New Brand Ambassador of Gatorade India.

Born in a farmer family, Das has reached incredible heights, winning five back-to-back gold medals in a month in the Czech Republic in July 2019. The young sensation rewrote history books in 2018 as she became the first Indian athlete to win a gold medal in any format of a global track event when she clocked at 51.46 seconds at the IAAF World U20 Championships held in Finland. From a young age, Das was interested in Sports as during her childhood days she played football with the boys from her school and wanted to pursue a career in women’s football. But upon the advice of a school physical education teacher, she changed to sprint running and hasn’t looked back since, winning countless medals along the way.

Her success has taken her to new heights in the Sports world as in September 2018 she was announced as the brand ambassador of Adidas. Das will be gearing up for the 2020 Tokyo Olympics where she will try and add to her already a well-established legend.