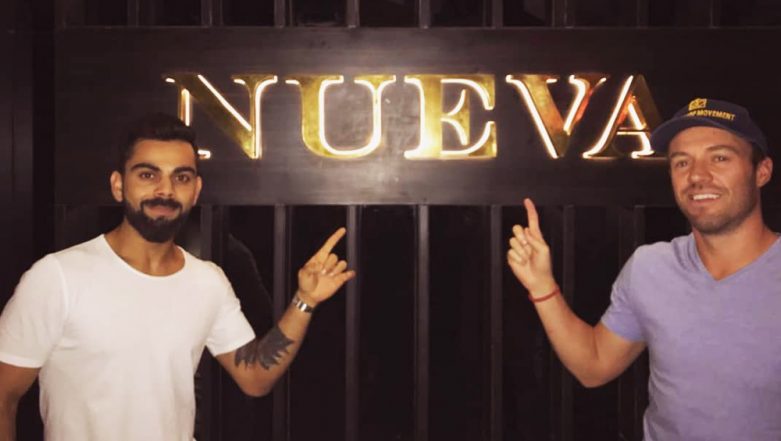 Mumbai, May 11: Royal Challengers Bangalore (RCB) will play their next match against Delhi Daredevils (DD) at Feroz Shah Kotla Ground on May 12. With the crucial match a couple of nights away, RCB captain Virat Kohli along with his teammates decided to visit his own restaurant ‘Nueva Bar & Dining’ in South Delhi, amidst the break. The visit by RCB players was a surprise for the visitors who were present in the restaurant.

The RCB team is currently at the 7th spot in the Indian Premier League (IPL) 2018 Points Table. However, that didn’t stop them to take a much-deserved break in the two-month long physically draining restaurant. It was captain Virat Kohli again, who in another instance to bond well with his teammates, paid a visit to his Fine Dining Restaurant & Bar at RK Puram in New Delhi. Glimpses of RCB players at Nueva restaurant:

Kohli, being the gentleman that he is, was seen clicking pictures and posing for the photographs, much to the delight of the fans. A fan page of Virat Kohli on Twitter posted a couple of videos online:

Earlier, Virat Kohli along with Yuzvendra Chahal, Parthiv Patel and others were seen at RCB’s fast-bowler Mohammed Siraj’s house feasting on Biryanis and the likes. The 29-year-old hasn’t had a great IPL this season with his team being able to win only 3 matches out of 10 that they played in. On a personal front, Kohli has scored a total of 396 runs in all the matches that he has played, with a staggering average of 49.50 and with the strike rate of 135.15.