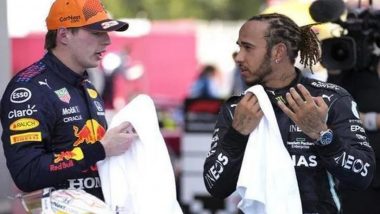 Max Verstappen was crowned as Formula 1 Champion of 2021 after winning the Abu Dhabi Grand Prix 2021 in the last lap. The race turned out to be quite a dramatic one after Nicholas Latifi's car opened the out the race wide giving an opportunity to win Verstappen his maiden title. Now, the Red Bull racer has been voted as the best racer by his peers. The poll was conducted by the Formula 1 bosses where Max Verstappen once again pipped Lewis Hamilton who was placed on number two. Lewis Hamilton UNFOLLOWS Everyone After Losing Formula 1 Championship 2021 Title, Mercedes Star’s Brother Nicholas Says ‘He’s Taking a Break From Social Media'.

The race between Max Verstappen and Lewis Hamilton was so intense that Mercedes and Red Bull refused to vote. So only 14 drivers voted and Max Verstappen once again pipped Lewis Hamilton. The points system was quite similar to the one used in every F1 race. The British racer unsurprisingly stood on number two. Lando Norris stood on number three. Ferrari's Carlos Sainz and Charles LeClerc finished fourth and fifth with Fernando Alonso and Pierre Gasley sixth and seventh.

Lewis Hamilton put on a brave face after losing the final race and hugged Max Verstappen to congratulate him. In fact, Lewis Hamilton's father Anthony also hugged Verstappen and congratulated him for the win. The race had surprised many fans watching the proceedings. The likes of Sachin Tendulkar, Rohit Sharma, Monty Panesar had lauded Lewis Hamilton. Lewis Hamilton was looking to break Michael Schumacher's record had he won the title. But that didn't happen.

(The above story first appeared on LatestLY on Dec 30, 2021 03:05 PM IST. For more news and updates on politics, world, sports, entertainment and lifestyle, log on to our website latestly.com).