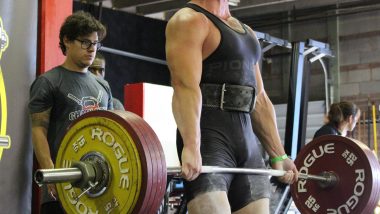 New Delhi, May 4: The Indian duo of T Madhavan and Muna Nayak finished fourth and sixth respectively in the men's 61kg category at the IWF Junior World Weightlifting Championships in Heraklion, Greece. The 18-year-old Madhavan aggregated 263kg (118kg+145kg) to finish fourth, missing the podium by five kgs on Tuesday night.

Meanwhile, Muna achieved a total weight of 258kg (113kg+145kg) to end sixth in the 10-lifter field. The 19-year-old failed to lift 150kg in his final clean and jerk attempt, but had the Odisha lifter succeeded, he would have won the silver medal in the section. The gold medal went to USA's Hampton Morris for a total effort of 276kg (116kg+160kg).

He smashed the clean and jerk junior men's world record when he lifted the 160kg barbell in his third attempt. The earlier mark of 159kg was in North Korea's Kim Chung Guk's name.

In the women's events, Shrabani Das finished seventh with an aggregate of 181kg (78kg+103kg) in the 55kg weight division.

The West Bengal lifter failed in her second snatch attempt of 78kg but managed to pull off the other five lifts cleanly. India has won three medals in the ongoing event, including a gold, silver and bronze each. On Monday, Harshada Garud (women's 45kg) became the first Indian to win a gold medal in the event. India had sent an eight-member contingent for the tournament. Only the event of Maibam Martina Devi, who competes in the +87kg, is left.