Rafael Nadal vs Nick Kyrgios Head-to-Head Record: Take a Look at Who Dominates This Tennis Rivalry Ahead of Their Wimbledon 2022 Men’s Singles Semifinal Match

Rafael Nadal would be looking to continue his three-match winning streak against Nick Kyrgios when the two players meet in the 2022 Wimbledon semifinals. On the other hand, Kyrgios, who has reached the last four in Championships for the first time in his career, would try to get a ticket to the final showdown. Check out the head-to-head record of both players. 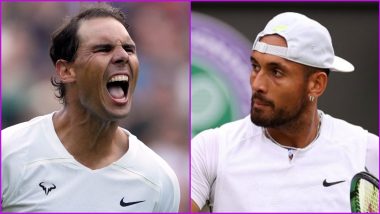 The Wimbledon 2022 title is just two steps away from the players in Mens' Singles category as the semifinalists are set to face each other in the two epic showdowns. Rafael Nadal will take on an energetic Nick Kyrgios in the semi-finals of Championships, which has a scheduled start at 6 PM IST (Indian Standard Time). Nadal has booked the last four sport after coming through a five-set thrilling victory against Taylor Fritz. On the other hand, his opponent Nick Kyrgios, recently charged with assault allegations by former girlfriend Chaira Passari, has overcome the quarterfinal challenge of Cristian Garin with seemingly easy win. The Spaniard, who is on a quest of 3rd Wimbledon title in his career, would be looking to continue his winning streak at the tournament. However, Kyrgios would be pumped and ready to show the exit door to Nadal after reaching his first semi-finals at All England Club. The two stalwarts have faced each other for nine times before this semi-final clash and Nadal has emerged winner on six occasions, with Kyrgios winning three times. Now, have a look at the game-by-game head-to-head record between Nadal and Kyrgios. Wimbledon 2022 Semi-finals: Who Plays Whom in Men’s Singles Last Four?

Nadal first time met a young Kyrgios at 2014 Wimbledon in the round of 16. The in-form Spaniard engaged in a four-set battle against an Australian youngster and much to tennis world's surprise, Kyrgios defeated Nadal.

In Spanish ATP Masters, Rafael Nadal stormed past Kyrgios in the round of 16. The match was played at outdoor clay court, and the king of clay court, Nadal won 6-3, 6-1 in a one-sided match. Wimbledon 2022: Rafael Nadal Overcomes Pain Barrier and Beats Taylor Fritz To Reach Semifinals.

The two stalwarts once again faced each other in 2017 at Cincinnati Open where Nick Kyrgios got the better of Nadal by beating the Spaniard 6-2, 7-5 at outdoor hard court.

For the first time, the two tennis stars met in a final match. In 2017 Beijing Open final, Rafael Nadal eased past Kyrgios and won the title. He beat the Australian 6-2, 6-1 in the summit showdown.

Nick Kyrgios knocked out Rafael Nadal from the 2019 Mexican Open. The 27-year-old Aussie defeated the Spaniard 3-6, 7-6, 7-6 to  reach the quarter-finals of the tournament.

The most recent face off between the two happened at Indian Wells Open earlier this year. Nadal once again trounced Kyrgios 7-6, 5-7, 6-4 to continue his good run against the latter.

(The above story first appeared on LatestLY on Jul 07, 2022 04:29 PM IST. For more news and updates on politics, world, sports, entertainment and lifestyle, log on to our website latestly.com).