Nick Kyrgios, who is currently playing at Wimbledon 2022, has been charged with physical offense by his ex-gf Chiara Passari. The player has been summoned by Canberra Court for the hearing of this case. 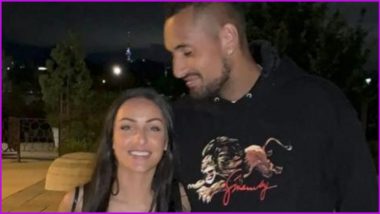 Australian tennis star Nick Kyrgios is due to face court proceedings in Canberra today after being charged with physical assault on former girlfriend, the Canberra Times reported. The tennis player, who is currently playing at Wimbledon 2022, has been charged with physical offense by his ex-gf Chiara Passari, who had earlier lodged a formal complaint to the UK Police. According to the police reports, Kyrgios might face a jail time of two years if he is found guilty in the court hearing.

The Police officials told The Canberra Times: “ACT Policing can confirm a 27-year-old Watson man is scheduled to face the ACT Magistrates Court on the 2nd of August in relation to one charge of common assault following an incident in December 2021,”

However, there has not been any official comment from Nick Kyrgios on this matter. His lawyer, Barrister Jason Moffett has commented that it is domestic issue and there is nothing to connect this matter with physical violence. “It’s in the context of a domestic relationship,” Moffett said.

“Given the matter is before the court ... he doesn’t have a comment at this stage, but in the fullness of time we’ll issue a media release," the Barrister concluded.

Kyrgios is due to play his quarter-final clash against Cristian Garin at 2022 Wimbledon. For the first time he has reached the last 8 of any major tournament since 2015 when he played in Australian Open's quarter-finals.

(The above story first appeared on LatestLY on Jul 05, 2022 05:35 PM IST. For more news and updates on politics, world, sports, entertainment and lifestyle, log on to our website latestly.com).