Rafael Nadal registered a come from behind win after being two sets down to win the 2022 Australian Open men's singles final. The legendary Spaniard's clash with Medvedev lasted for incredible five hours and 24 minutes. 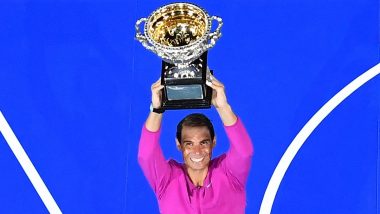 With this triumph, Nadal has broken his tie with Novak Djokovic and Roger Federer for the most men's singles Grand Slam titles in history. The Spaniard has also become the fourth man in history to claim multiple crowns at all four majors. As expected the match started at very high intensity for the Russian as he broke Nadal twice early and grabbed a lead after the first set. The second set had its ups and downs as the sixth-seeded broke Medvedev early. But the Russian was quick to respond with another break. With both players managing to hold their serves, the set went into the tiebreak. The tie break was dominated by the big-server Medvedev who gave Nadal rarely a chance to fight his way back into the match.

With momentum on his side, the 25-year-old kept charging at the Spaniard in the third set as one of the highlights and the decisive moment of the match came in the sixth game when Nadal won a 19-shot rally and then a 21-shot rally to hold his serve from 0-40 down. Meanwhile, check out some stats from Nada's record-breaking win. Roger Federer, Novak Djokovic Congratulate Rafael Nadal on Winning his Record Breaking 21st Grand Slam Title.

# Rafael Nadal now has the most number of Grand Slam singles titles in men's tennis history.

# This was Nadal’s sixth appearance in an Australian Open final

# Nadal becomes the fourth man to win each of the four Grand Slams twice. Novak Djokovic, Roy Emerson and Rod Laver are the others to have done it.

# Nadal joins Pete Sampras and Ken Rosewall as only men's players to have won the Grand Slam titles in their teens, 20s and 30s.

# Nadal, 35, is the third oldest man in the Open Era to win a Grand Slam title.

# Nadal is the first man in the Open era to win the men's singles Australian Open final after losing the first two sets.

The 35-year-old who dramatically changed the level of his tennis after the first two sets broke Medvedev for the second time in the penultimate set during the 5th game. But this time the second-seed was unable to respond as Nadal held onto his serve and took the match into the decider. The 5th set was all about nerves and Nadal was the first to draw blood in the fifth game when he broke the serve of his opponent. After some epic holds, when the Spaniard was serving for the championship in the 10th game, the match took another wild turn as the Russian broke his opponent. With stakes so high, Nadal delivered another masterpiece in the next game as he broke the Russian and held his serve in next avoid any upset as he marched towards the record-breaking Grand Slam. (Inputs ANI).

(The above story first appeared on LatestLY on Jan 31, 2022 12:02 AM IST. For more news and updates on politics, world, sports, entertainment and lifestyle, log on to our website latestly.com).