This is the second time that the two are facing each other. Safwat had won their last match, claiming a 7-6 (2) 6-2 win in the qualifying rounds of the Australian Open last year. 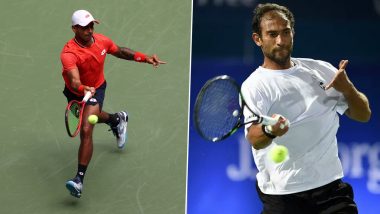 Sumit Nagal is all set to take on Mohamed Safwat in a Round of 32 clash at the Braunschweig Challenger, also known as the Sparkassen Open on Monday. The match would be played in Court 7 and is slated to be held at 7:10 PM IST (Indian Standard Time). Nagal, who had failed to make the cut for the French Open in May, would use this tournament to bounce back to form. He would be taling on Safwat, the 170th ranked Egyptian. Nagal's match against Safwat is the second time that these two are facing off against each other. Safwat currently holds the advantage in terms of head-to-head statistics, with him claiming a 7-6 (2) 6-2 win in the qualifying rounds of the Australian Open last year. Wimbledon 2021: Full Crowds at Centre Court and Number 1 Court Allowed from Quarterfinals to Finals

Nagal would be competing for the first time since his first-round loss to Lamasine in the Aix En Province Challenger in June. Safwat meanwhile had last competed in the Wimbledon qualifying rounds where he had suffered a defeat to Ferreira Silva.

What is the Date, Time, Schedule and Venue of Braunschweig Challenger 2021 CC  Men's Singles First Round Match?

Where to Watch the Live Telecast Braunschweig Challenger 2021 Men's Singles First Round Match? Which TV Channel Will Broadcast it LIVE in India?

The Braunschweig Challenger 2021 has no official sponsors in India and hence, there would be no live telecast of the Sumit Nagal vs Mohamed Safwat first-round match on TV.

Where to Watch the Live Streaming of Sumit Nagal vs Mohamed Safwat Men's Singles Round 3 Match Online in India?

(The above story first appeared on LatestLY on Jul 05, 2021 01:30 PM IST. For more news and updates on politics, world, sports, entertainment and lifestyle, log on to our website latestly.com).