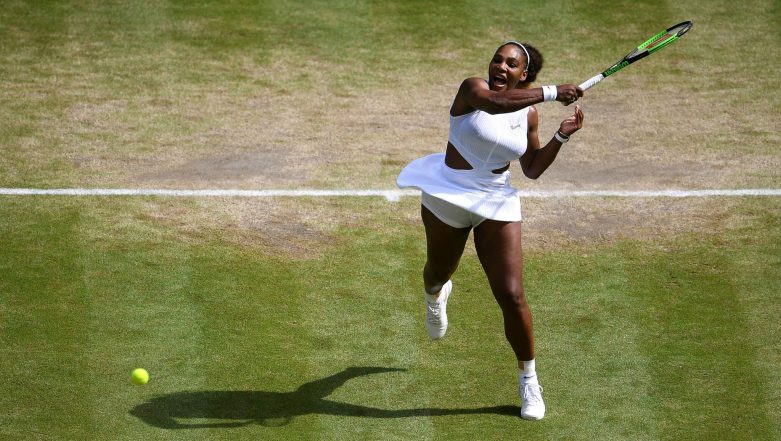 London, July 12: On Saturday, Serena Williams will try to win an eighth Wimbledon title and record-equalling 24th Grand Slam. AFP Sport looks at her previous seven victories at the All England Club:

Serena defeats two-time defending champion and sister Venus to win her first Wimbledon singles title. Serena also claims the world number one ranking for the first time, adding the All England Club crown to her win the previous month at the French Open.

Serena clinches her second straight Wimbledon crown with victory coming in the wake of her defeat to Justine Henin in the Roland Garros semi-finals.

Venus struggled with an abdominal and thigh injury which affected her serve and movement as the final went on. "She's tougher than I ever thought she was," said Serena. "I knew she was tough but she's gone on to a whole different level. To play today knowing she was injured, she's definitely up there with the real fighters and champions."

Serena again defeats her sister, the two-time defending champion. It is her third Wimbledon singles title and 11th Grand Slam singles trophy overall. She takes victory after having saved a match point against Elena Dementieva in the semi-finals. Venus was attempting to become the first player to win the women's singles title for three consecutive years since Steffi Graf from 1991-1993. Serena Williams to Meet Simona Halep at Wimbledon Final.

World number one Serena powers past Vera Zvonareva in just 66 minutes to win a fourth Wimbledon, preserving her record of not having dropped a set in the process. It is her 13th Grand Slam singles title.

The 30-year-old American wins a fifth Wimbledon and 14th major, becoming the oldest winner since Martina Navratilova in 1990. The younger Williams sister draws level with Venus on five titles at the tournament. Radwanska is the first Polish woman in a Grand Slam final since 1939.

A 21st major for Serena as she adds Wimbledon to her Australian and French Open titles in 2015, completing the 'Serena Slam' having also won the US Open in the previous year. "There was definitely pressure towards the end. Garbine started playing really well and I just had to think to stay out there and work really hard." Serena was unable to complete the calendar Grand Slam when she went on to lose in the semi-finals in New York to Roberta Vinci.

A seventh Wimbledon for the American and 22nd Grand Slam title, equalling Steffi Graf's Open era record of major titles. "It makes the victory even sweeter to know how hard I worked hard for it. This court definitely feels like home," she said.