In talking about the KiXX, Commissioner Johnson commented, “they’ll return with an updated logo that retains the team colors of teal, red and black. Also, fan favorite Socceroo (mascot) will be reborn”. He added, “We’re bringing back everything but The Spectrum”, he said with a smile. The Spectrum was the KiXX home arena from 1996-2009. 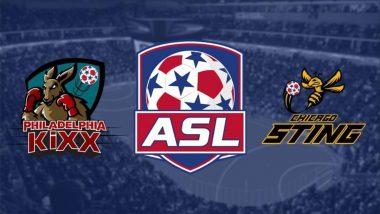 The Arena Soccer League, a newly formed professional league who recently revealed their plans to begin play nationwide in April of 2022, has also announced the return of some iconic indoor teams, namely the Philadelphia KiXX and the Chicago Sting. ASL President and acting Commissioner, Reilly Johnson stated, “we thought it would be a nice tribute to some of the great arena teams of the past to bring back their iconic names and colors. I believe the fans will enjoy that”.

The league’s goal of placing ten teams into the largest possible markets may bring professional arena soccer to a city near you. The remaining eight cities and team names will be revealed in the near future as details become finalized.

Other features of the Arena Soccer League include having a 36-game schedule where each team hosts 18 home games, holding an annual player draft, and having an all-star game and an awards banquet at the end of the season.

The exciting, fast-paced game of arena soccer is played on artificial turf inside a rink wall that’s constructed of dasher boards and plexiglass barriers (like hockey). The wall is considered “in play” and the ball may be played off the wall to continue the fast pace of play. The shape of the field is a rounded rectangle, with typical dimensions being 200 feet long by 85 feet wide. The goals are placed at opposite ends of the field and measure 14 feet wide by 8 feet high. The game has similar rules to that of outdoor soccer, but they are modified to promote play inside the rink wall with fewer players on the field.

According to league documents, the mission statement of the Arena Soccer League is “to provide a professional, fast-paced and exciting entertainment experience for the community; establish a professional and successful atmosphere for our teams; create family-sustaining jobs in the field of sports entertainment; and elevate the sport of arena soccer to national prominence”. And the leadership of the ASL is self-described as a “group of passionate, big-thinking, and business-minded arena soccer fans seeking to elevate the status of the pro game in North America to the highest possible level”.

In talking about the KiXX, Commissioner Johnson commented, “they’ll return with an updated logo that retains the team colors of teal, red and black. Also, fan favorite Socceroo (mascot) will be reborn”. He added, “We’re bringing back everything but The Spectrum”, he said with a smile. The Spectrum was the KiXX home arena from 1996-2009.

The Philadelphia KiXX were founded in 1995 as an expansion team in the National Professional Soccer League (NPSL) and later played in the second iteration of the Major Indoor Soccer League (MISL II). They were initially owned by Ed Tepper, best known as one of the co-founders of the original Major Indoor Soccer League (MISL) in 1978. The KiXX played 14 seasons in Philly, averaging over 6,000 spectators per game from 1996 to 2010. They made the playoffs ten times, the finals three times, and won the MISL II championship twice. Their best season was 2001-2002 when they won 30 and lost 14, eventually beating the Milwaukee Wave for the trophy.

The KiXX boasted stars like goalkeeper Peter Pappas and player/coach Don D’Ambra. Pappas, arguably one of the best keepers of his era, spent all 13 of his pro seasons with the KiXX. He was named MISL “Goalkeeper of the Year” four times and was an All-League selection eight times. D’Ambra is probably the best-known name in KiXX history and was with the team for all 14 seasons. He was a 4-time All-Star, a 3-time All-League selection, and was chosen as MVP of the championship series in 2007. D’Ambra also holds the KiXX all-time records for games played (445), goals (393), points (1020), game winning goals (42), and coaching victories (119).

The original Chicago Sting were founded as an outdoor team in 1974 by a Chicago commodities broker named Lee Stern, and were in existence until 1988. The team’s name comes from the popular 1973 film, “The Sting”, whose storyline takes place in 1930’s Chicago. They competed in the outdoor North American Soccer League (NASL) from 1975 to 1984 and the indoor North American Soccer League in 1980-81, 1981-82 and 1983-84. The Sting also played in the Major Indoor Soccer League (MISL) during the 1982-83 season and again from 1984 to 1988. The indoor club played at Chicago Stadium and the Rosemont Horizon (currently the Allstate Arena). They played eight seasons of arena soccer (3 NASL, 5 MISL), winning two central division titles along with two 2nd place division finishes. Their best season was 1980-81 with a 13 and 5 record, winning the central division and finishing as league runner-up.

When asked about the Sting name, Commissioner Johnson said, “Chicagoland has a long and illustrious history with the game of soccer and there are so many notable team names from the past. It just felt right to bring back the Sting name because both Sting teams seemed to embody the spirit of soccer in Chicago.”

Fan support was never a problem for the Sting. Attendances at Chicago Stadium showed the Sting were regularly outdrawing the NBA’s Chicago Bulls and getting close to the crowds pulled in by the NHL’s Chicago Blackhawks. In fact, the Sting set a North America indoor soccer game attendance record in the final game of the 1981-82 regular season, as 19,398 fans saw them beat the Tampa Bay Rowdies 10–9 in sudden death overtime. They averaged an amazing 13,322 fans per game during the 1981-82 season, had three seasons over 10,000 fans per game, and averaged over 8,800 per game over eight seasons.

Along with Indoor Soccer Hall of Famer Pato Margetic, the Sting player everyone remembers is German-born Karl-Heinz Granitza. In seven indoor seasons with Chicago from 1980-1987, the perennial all-star played in 238 games with 314 goals, 267 assists, and 706 points. For the 1980-81 season, Granitza led the league in goals (42) and scoring (111 points), in only 18 games! Later, he held the indoor scoring streak record of 35 consecutive games and was chosen as the 1983–84 All-Star Game MVP, having scored a remarkable four goals in the game. Granitza would finish his career as the NASL's second all-time leading scorer and was later inducted into the U.S. National Soccer Hall of Fame.