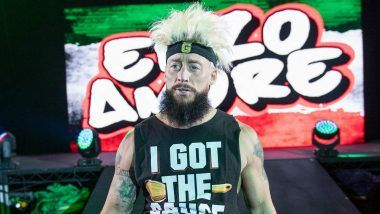 It comes as a shocker for World Wrestling Entertainment (WWE) fans as RAW superstar Eric Arndt ­– ring name Enzo Amore – has been suspended from the company. Amore was released from the company after allegations of rape against him surfaced. The WWE officials were reportedly not aware of the situation until media persons reached out to them.

Enzo Amore was suspended moments before the iconic episode of RAW’s 25th Anniversary celebration went on-air. There were a lot of rumors going on Twitter and it took no time for WWE to confirm the news of Amore’s release. The company’s official Twitter account tweeted, “WWE has come to terms on the release of Eric Arndt (Enzo Amore)." Read the tweet:

WWE has come to terms on the release of Eric Arndt (Enzo Amore). https://t.co/iagk1311eD

The official statement on WWE’s official site reads: “WWE has zero tolerance for matters involving sexual harassment or sexual assault. Until this matter is resolved, Eric Arndt (aka Enzo Amore) has been suspended.”

As per the report by Pro Wrestling Sheet, the alleged rape incident happened last year in October inside a hotel room in Phoenix. The alleged victim came to the following note on her Twitter account “OKAY..it’s been long enough & I have been so so scared to share this. I was raped in mid-October by the WWE Enzo Amore (also known as Eric Arden) & Tyler Grosso; TOOPOOR let it happen as accomplices. I was in a mental hospital for 45 days after it. They ARE NOT good people.”

It was earlier reported that Enzo Amore has been drawing a lot of heat in the dressing room because of his behaviour. Amore was popular for his in-ring commentary and rousing entrance speech. After his tag-team partner Big Cass broke up their team, Amore had lost a lot of momentum in WWE.

(The above story first appeared on LatestLY on Jan 25, 2018 12:05 PM IST. For more news and updates on politics, world, sports, entertainment and lifestyle, log on to our website latestly.com).