Within the next version of its mobile and desktop operating systems, Apple will attempt to frustrate tools used by social media platforms to automatically track web users -- an initiative Facebook may not "like". 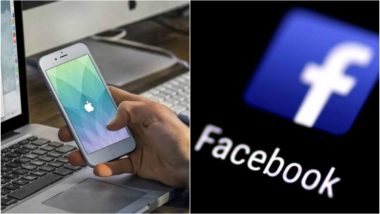 San Jose, June 5: Within the next version of its mobile and desktop operating systems, Apple will attempt to frustrate tools used by social media platforms to automatically track web users -- an initiative Facebook may not "like".

Besides making daily tasks faster and giving parents new tools to have more control of the time children spend interacting with iPhones and iPads, iOS 12 will also have new privacy features.

"As with all Apple software updates, enhanced privacy and security remain a top priority in iOS 12," Apple said in a statement.

"Safari now also presents simplified system information when users browse the web, preventing them from being tracked based on their system configuration," Apple added.

Industry experts believe that the move is likely to add to tensions between Apple and Facebook.

Apple's chief executive Tim Cook had previously described Facebook's practices as being an "invasion of privacy" -- an opinion Facebook's founder Mark Zuckerberg subsequently denounced as being "glib", the BBC reported on Monday.

At the Apple Worldwide Developers Conference (WWDC) 2018, the company's software chief Craig Federighi said that Facebook keeps watch over people in ways they might not be aware of.

"Well it turns out these can be used to track you, whether you click on them or not," Federighi was quoted as saying.

Apple's privacy initiative has already been lauded by industry experts.

"Apple is making changes to the core of how the browser works -- surprisingly strong changes that should enable greater privacy," Kevin Beaumont, a cyber-security expert, was quoted as saying by the BBC.

Apple also said that MacOS Mojave would combat a technique called "fingerprinting", in which advertisers try to track users who delete their cookies.

The method involves identifying computers by the fonts and plug-ins installed among other configuration details. To counter this, Apple will present web pages with less details about the computer, the BBC report said..

"As a result, your Mac will look more like everyone else's Mac, and it will be dramatically more difficult for data companies to uniquely identify your device," Federighi explained.

(The above story first appeared on LatestLY on Jun 05, 2018 02:34 PM IST. For more news and updates on politics, world, sports, entertainment and lifestyle, log on to our website latestly.com).