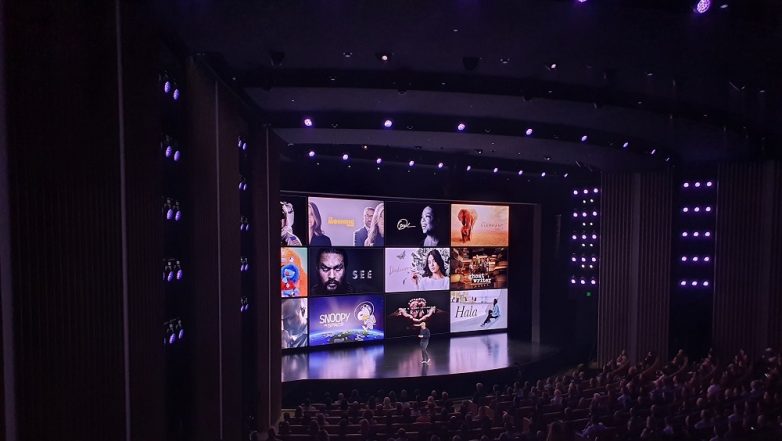 Cupertino (California), Sep 10: Giving its content streaming and gaming dreams a solid foundation, Apple on Tuesday began its mega event at the Steve Jobs Theater here not with regular hardware or software updates, but by unveiling its subscription-based video streaming Apple TV+ and gaming service Arcade. Apple TV+ will be available from November 1 in over 100 countries for just $4.99 per month (family subscription). Arcade gaming service will available on App Store from September 19, also for $4.99 per month (family subscription) along with one-month free trial. Apple Watch Series 5 & New iPad Launched Along Side iPhone 11 Series.

Taking a lead over Disney that is likely to unveil Disney+ service on November 12 for $6.99 a month, Apple TV+ will offer a powerful and inspiring line-up of original shows, movies and documentaries, including "The Morning Show," "Dickinson," "See," "For All Mankind" and "The Elephant Queen."

The service will be available on the Apple TV app on iPhone, iPad, Apple TV, iPod touch, Mac and other platforms, including online at tv.apple.com, for $4.99 per month with a seven-day free trial.

"Apple TV+ is an unprecedented global video service with an all-original slate. We look forward to giving audiences everywhere the opportunity to enjoy these compelling stories within a rich, personalised experience on all the screens they love," said Jamie Erlicht, Apple's head of Worldwide Video.

"Apple TV+ will be available for one-year promotional package with new Apple products," announced Apple CEO Tim Cook. "We can't wait for it to be launched and start playing," Cook said.

Apple Arcade gaming service will feature over 100 new and exclusive games from game developers like Konami, Capcom and Annapurna Interactive, and more. The App Store currently has nearly 300,000 free and paid games. With the simplicity of a single subscription, Apple Arcade will bring games to the App Store's more than one billion gaming customers.