Cryptocurrency vs CBDC: How Blockchain-Based Central Bank Digital Currency and Crypto Are Different

Mckinsey says that with the rapid rise in circulation of stablecoins over the past couple of years, central banks have stepped up efforts to explore their own stable digital currencies. 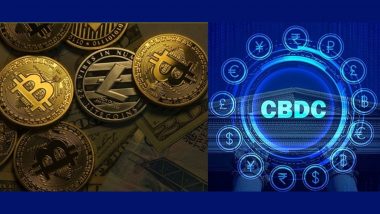 New Delhi, November 6: Both the cryptocurrencies and the central bank digital currency (CBDCs) have attracted the interest of millions across India. However, despite their common position as "digital assets", there are some significant distinctions between the two.

Former Finance Secretary S.C. Garg believes that the CBDC will be more like "dematerialised bank notes" as they have nothing to do with cryptocurrencies. "The way cryptocurrencies have evolved in value, the world may not accept their use as currency. However, regulated digital coins like the CBDC might be the future of crypto," he said. Cryptocurrency Prices in India.

Mckinsey says that with the rapid rise in circulation of stablecoins over the past couple of years, central banks have stepped up efforts to explore their own stable digital currencies. The CBDC, or the Indian e-rupee, is a digital token issued by the RBI and is linked to the value of the fiat currency of the country.

"The emergence and development of cryptocurrencies and Blockchain technology has increased interest in cashless societies and digital currency. As a result, governments and central banks throughout the world are considering the use of government-backed digital currencies," says the Blockchain Council, a group of Blockchain experts.

The CBDCs' primary purpose is to provide privacy, transferability, ease, accessibility, and financial security to companies and consumers. "CBDCs also minimise the maintenance required for a complicated financial system, cut cross-border transaction costs, and give lower-cost choices to people who now utilise other money transfer methods," says the Council.

Individuals can participate in investment markets to speculate on the price behaviour of a cryptocurrency. They may also use particular projects like Bitcoin as a store of value to shield themselves from inflation and economic instability.

Bitcoin and Ethereum may be used by anybody to perform transactions and payments. Today, more merchants and stores accept cryptocurrency payments than ever before, according to the Council. There are several contrasts between CBDCs and cryptocurrencies.

Anonymity is a benefit for cryptocurrency users. CBDC customers' identities will be linked to an existing bank account as well as a similar quantity of personal information.

A central bank determines the regulations for CBDC networks. The authority in crypto networks is given to the user base, which makes choices through consensus.

"CBDCs can only be used for payments and other monetary transactions. Cryptocurrencies may be used for both speculation and payment," according to the Council.

(The above story first appeared on LatestLY on Nov 06, 2022 07:19 PM IST. For more news and updates on politics, world, sports, entertainment and lifestyle, log on to our website latestly.com).