Google challenged a single judge bench order of the court which directed it to remove content globally, which was flagged as "objectionable" by a female petitioner, for being "offensive". 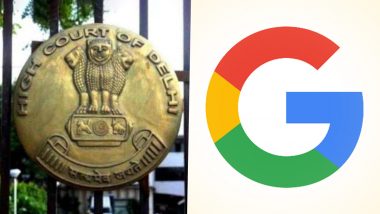 New Delhi: Google LLC moved a plea on Wednesday in the Delhi High Court seeking interim protection against its declaration as a "Social Media Intermediary" (SMI) under the Information Technology (Intermediary Guidelines and Digital Ethics Code) Rules 2021 (IT Rules 2021) and contended these rules are not applicable to its search engine. Search Engine Not Classified as Part of New IT Intermediary Guidelines 2021, Says Google.

"While we maintain a consistent policy over removal of objectionable content from search results, the Delhi High Court order has cast certain obligations that would wrongly classify Google search as a social media intermediary," a Google spokesperson told IANS. "We've filed an appeal against this part of the order and look forward to explaining the steps we take to remove objectionable content from Google search results," the company spokesperson added.

Google challenged a single judge bench order of the court which directed it to remove content globally, which was flagged as "objectionable" by a female petitioner, for being "offensive". The petitioner claimed that the content was taken from her social media accounts on Facebook and Instagram, and circulated without her consent. Despite court orders the content was not removed in entirety from the World Wide Web. The plea urged the High Court to set aside the single judge order.

A bench of Chief Justice D.N. Patel and Justice Jyoti Singh issued notices to the Centre, the Delhi government, Facebook, Internet Service Providers Association of India, the pornographic site and the woman. The High Court sought their responses in the matter by July 25. Citing the April 20 judgment, Google contended it has "mischaracterised" its search engine as a 'social media intermediary' or 'significant social media intermediary', which has been provided under the new rules for digital media.

Google said it was aggrieved by the blanket, "template directions" issued by single judge. It further argued that the judge mixed various sections of the IT Act and separate rules prescribed thereunder and passed template directions combining all such offences and provisions, which it emphasized was bad in law. However, the High Court said it would not pass any interim order at this stage. A Google spokesperson told IANS that search engines are a reflection of the content and information that is available on the internet.

(The above story first appeared on LatestLY on Jun 02, 2021 05:39 PM IST. For more news and updates on politics, world, sports, entertainment and lifestyle, log on to our website latestly.com).