Tech giant Google has introduced a new website -- Read Along -- to help kids learn to read independently with the help of an animated reading assistant named "Diya". 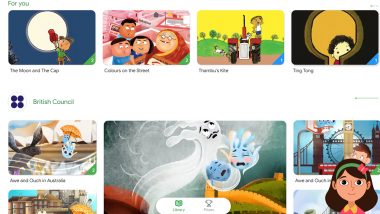 San Francisco: Tech giant Google has introduced a new website -- Read Along -- to help kids learn to read independently with the help of an animated reading assistant named "Diya". Read Along has been an Android app so far, which was first released as Bolo in India in 2019 and released globally as Read Along the following year. Google Search Engine Down for Several Users, Back Online After Global Outage.

"To make it accessible to more users, we have launched the public beta of the website version," Tasnim Khan Software Engineer, Read Along, said in a blogpost. "The website contains the same magic: Diya's help and hundreds of well-illustrated stories across several languages," Khan added.

With the web version, parents can let their children use Read Along on bigger screens by logging into a browser from smartphones, laptops or PCs at readalong.google.com. Just like the Android app, all the speech recognition happens in the browser, so children's voice data remains private and we do not send it to any servers. The company said that as kids read stories aloud, Diya listens and gives both correctional and encouraging feedback to help kids develop their reading skills.

(The above story first appeared on LatestLY on Aug 10, 2022 12:02 PM IST. For more news and updates on politics, world, sports, entertainment and lifestyle, log on to our website latestly.com).