IFA 2018: Sony Xperia XZ3 With Curved OLED Display Revealed; To Go on Sale in the US by October

Sony Xperia XZ3 flagship smartphone will go on sale in the US market on October 17, which can be purchased at $899.99. 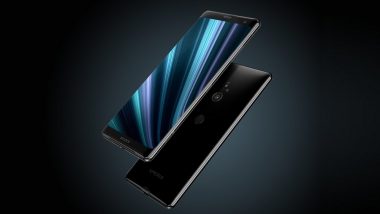 Sony, a Japanese smartphone maker has officially revealed the new Xperia XZ3 flagship smartphone at IFA 2018. The newly revealed XZ3 smartphone is introduced as a successor to Xperia XZ2, which was launched globally at MWC 2018. Sporting minor refinements, the new Xperia XZ3 carries the same design language as that of its predecessor. The smartphone bags a slightly taller display, providing a thinner bottom bezel as compared to XZ2. Priced at $899.99 (around Rs 63,700), the smartphone is slated to go on sale in the US from October 17. Apple Likely to Unveil iPhone 9, iPhone 11 And iPhone 11 Plus at Event on September 12; Know Leaked Features & Specifications of New Models.

However, the pre-orders for the new Xperia XZ3 will open on September 24. The buyers pre-ordering the new flagship product stand at chance to get Xperia Ear Duo headphones absolutely free.  As far as the domestic launch is concerned, there is no official word from the manufacturer yet. Xiaomi Redmi 6, Redmi 6A, Redmi 6 Pro Smartphones Teased Online; India Launch Imminent.

On the specification front, the new Xperia XZ3 boasts a 6-inch QHD+ dual curved OLED display with HDR content playback support. Under the skin, the flagship comes packed with a Qualcomm Snapdragon 845 SoC with octa-core CPU mated with 4GB of RAM and 64GB internal storage. It also comes with a microSD card slot for expanding the memory storage. Xiaomi Poco F1 vs OnePlus 6: Price, Specifications, Features and Variants - Comparison.

(The above story first appeared on LatestLY on Aug 31, 2018 11:11 AM IST. For more news and updates on politics, world, sports, entertainment and lifestyle, log on to our website latestly.com).