Tech giant Microsoft is open sourcing more than 1,500 of its 3D emoji, making them accessible for creators to remix and build upon. 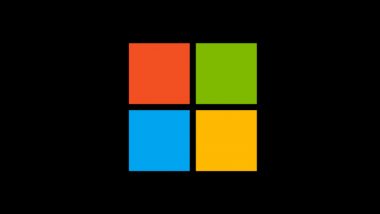 San Francisco: Tech giant Microsoft is open sourcing more than 1,500 of its 3D emoji, making them accessible for creators to remix and build upon. Almost all of Microsoft's 1,538 emoji library will be available on Figma and GitHub in a move that Microsoft hopes will encourage more creativity and inclusivity in the emoji space, reports The Verge. Microsoft Layoffs: Tech Giant Announces 200 More Job Cuts, This Time From Consumer R&D Team, Says Report.

While Microsoft released its emoji in Windows 11 last year and 3D versions in Microsoft Teams in February, the company hadn't originally planned to open source its work.

"Initially, we were focused on building the body of work," Jon Friedman, Microsoft's CVP of design and research, was quoted as saying in an interview. "The idea kind of just started popping around, and it aligned with our belief and perspective that the more open source we are internally and externally, the more product excellence we can build, and the more relevant we can be for all of humanity," Friedman added.

As per the report, Microsoft spent a lot of time on inclusive design and the varied needs of emojis that span across different people, religions, and countries. The result was more than 1,500 emojis that include custom skin tones, with bright and saturated colours and a focus on fun in the workplace.

Even Clippy was introduced as a replacement for the paper clip emoji, but that's one of a few that won't be open sourced simply because of legal requirements around Microsoft's trademarks, the report said.

Creators will be able to take most of Microsoft's bright and colourful 3D emoji and remix them into stickers, use them in content, or create unique sets of emojis.

(The above story first appeared on LatestLY on Aug 11, 2022 04:34 PM IST. For more news and updates on politics, world, sports, entertainment and lifestyle, log on to our website latestly.com).