The dead turtles were removed and buried so that there is no further contamination affecting other marine life. The net was 392-foot long unapproved for fishing. 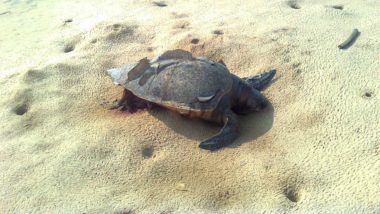 Illegal fishing has been claiming so much of marine life it is saddening. Now in a recent report, almost 300 endangered Olive Ridley turtles were found floating in the Mexico sea. The turtles were in a badly decomposed state in an abandoned fishing net. These turtles died after they were caught in this illegal fishing net in a prohibited area near Puerto Escondido, Oaxaca. These turtles were dead for about a week before the locals reported it to the authorities. They were then buried on the beach coast. Olive Ridley Sea Turtles Nests in Mumbai: Know More About the Species and Other Turtle Nesting Spots in India.

The dead turtles were removed and buried so that there is no further contamination affecting other marine life. The net was 392-foot long unapproved for fishing. Experts said the turtles would have died of asphyxiation or the hooks attached to the net. However, the exact cause of their death is still under investigation. The Olive Ridley Turtles have been declared as endangered ones by Mexican officials and by the US Fish and Wildlife Service. The human activities are primarily responsible for this.

The officials are also on the lookout of who would have set up the net in the first place. Mexico does have criminal penalties imposed for the killing of sea turtles. A multilateral treaty criminalised killing the protected turtles from the year 1990. A specialised federal authority is looking into the case to find who is responsible for these mass killing.

(The above story first appeared on LatestLY on Aug 29, 2018 07:56 PM IST. For more news and updates on politics, world, sports, entertainment and lifestyle, log on to our website latestly.com).