The officials from State Mangrove Cell had received information about the turtle carcass found floating on Friday itself, but the carcass could not be retrieved owing to high tide. 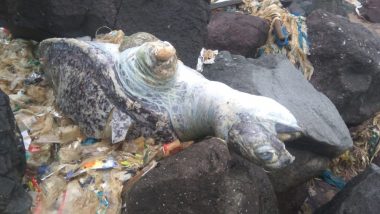 This year in March, Olive Ridley turtles were found on the Versova Beach in Mumbai which the officials said that it was a sight witnessed by the city after 20 years. The clean-up drive at the Versova beach started by a group of volunteers had proven to be a boon for the endangered sea turtles. However, since then, several turtles have been rescued on the shores of Mumbai. But this time, a mutilated carcass of an Olive Ridley turtle was found stuck between the rocks at Versova beach on Saturday. Earlier two turtles were rescued from Juhu Chowpatty and Walkeshwar, respectively.

As reported in DNA, the officials from State Mangrove Cell had received information about the turtle carcass found floating on Friday itself, but the carcass could not be retrieved owing to high tide. “Members of Versova Residents Volunteers (VRV) informed us about the carcass stuck in the rocks due to which its shell has cracked open. Since it’s and endangered and protected species, the turtle was buried in presence of our staff at the nearby spot,” said Prashant Deshmukh, RFO, Mangrove Cell.

Mr Deshmukh also added that they initially wanted to send the carcass for its post-mortem but since the turtle had been mutilated possibly after hitting the rocks due to high tide, they went ahead with the burial. Versova-based Afroz Shah who has been spearheading the clean-up drive since October 2015, wrote on his social media that while spotting a dead turtle early morning is heart-breaking, citizens, BMC and young students will strive to keep the beach clean and protect the marine species. Olive Ridley Sea Turtles Nests in Mumbai: Know More About the Species and Other Turtle Nesting Spots in India

Turtles are the most common victims of marine pollution; oil spills and they also lose their flippers after being hit by propellers of ships or getting stuck in the fishing net. Olive Ridley turtles are best known for their mass nesting behaviour and a female turtle can lay up to 80 to 100 eggs at a time. Rushikulya river in Odisha is one of the largest nesting sites in the world for Olive Ridley turtles.

(The above story first appeared on LatestLY on Aug 12, 2018 12:26 PM IST. For more news and updates on politics, world, sports, entertainment and lifestyle, log on to our website latestly.com).