Russia has developed a test system for identifying COVID-19 virus' antibodies in animal blood serum, according to the country's Federal Service for Veterinary and Phytosanitary Control, media reports said on Wednesday. 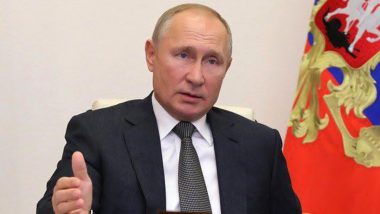 Moscow, June 23: Russia has developed a test system for identifying COVID-19 virus' antibodies in animal blood serum, according to the country's Federal Service for Veterinary and Phytosanitary Control, media reports said on Wednesday.

"Only specific antibodies generated in the animal body against SARS-CoV-2 virus are trapped in the course of blood serum testing," the regulator was quoted as saying by TASS news agency.  COVID-19 Vaccine for Children Likely To Be Registered in Russia in September

"The Federal Centre for Animal Health subordinate to the Federal Service for Veterinary and Phytosanitary Control developed a test system for identification of SARS-CoV-2 virus antibodies on the basis of the widespread enzyme-linked immune-electrodiffusion assay (ELISA) technology," the regulator added.

The procedure was tested during the research of biological materials of pets (cats and dogs), agricultural (pigs) and fur animals (ferrets, foxes, and minks). The test system is intended to analyse blood serum for all these animal species, the report said.

A Carnivak-Cov jab provides immunity for an estimated six months. The vaccine was earlier tested on dogs, cats, mink, foxes, and other animals and was proven to be effective, Rosselkhoznadzor had said.

Russia started mass production of Carnivac-Cov in early May and the first batch of 17,000 doses was produced at Rosselkhoznadzor's subordinate institution, the Federal Centre for Animal Health.

Russia is also negotiating for the fast registration of the vaccine abroad, particularly in the European Union.

While currently there is no evidence that animals play a significant role in spreading the disease to humans, infections have been confirmed in various species worldwide on -- dogs, cats, apes, and minks.

COVID-19 has been a serious problem for minks -- semi-aquatic mammals farmed for their fur. Multiple countries have reported infections in farmed mink which, in some cases, have fallen severely ill or died.

The US veterinary pharmaceutical company Zoetis is also developing a vaccine for animals.

(The above story first appeared on LatestLY on Jun 23, 2021 07:44 PM IST. For more news and updates on politics, world, sports, entertainment and lifestyle, log on to our website latestly.com).