NASA, SpaceX Gear Up to Launch Crew Dragon Spacecraft to ISS on May 27, Know All About the First Manned Space Flight That Will Take Off From Florida 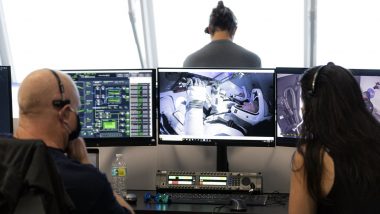 The National Aeronautics and Space Administration (NASA) and its commercial partner SpaceX are all set to launch the first manned space flight to the International Space Station (ISS). The space agency will launch two of its astronauts to the ISS in collaboration on May 27 from Launch Complex 39A in Florida. This will be the first flight into orbit of American astronauts on American rockets from American soil since the end of the space shuttle era in 2011. NASA, on its official website, has invited public to help celebrate a historic milestone in human spaceflight as it prepares for #LaunchAmerica. People can attend the launch virtually.

The flight, known as NASA’s SpaceX Demo-2 test flight, is targeted for lift off at 4:33 p.m. EDT Wednesday, May 27. The mission will send NASA astronauts Robert Behnken and Douglas Hurley to the International Space Station as part of the agency’s Commercial Crew Program. Check Timeline of the Launch Here.

All About SpaceX Crew Dragon's First Manned Flight on May 27

The launch of the mission, dubbed as 'Launch America', is scheduled for 4.33 p.m. EDT on Wednesday, May 27. The Falcon 9’s launch of Crew Dragon’s second demonstration (Demo-2) mission will take off from Launch Complex 39A (LC-39A) at NASA’s Kennedy Space Center in Florida. This test flight with NASA astronauts Bob Behnken and Doug Hurley on board the Dragon spacecraft will return human spaceflight to the United States.

All About SpaceX's Demo-2 Flight

What will happen after Lift-Off:

Once the mission is complete, NASA informed that the Crew Dragon will autonomously undock with the two astronauts on board, depart the space station and re-enter the Earth’s atmosphere. Upon splashdown just off Florida’s Atlantic Coast, the crew will be picked up at sea by SpaceX’s Go Navigator recovery vessel and return to Cape Canaveral.

On Friday, NASA and SpaceX gave a green signal for the Demo-2 mission and on Saturday the crewmates -Douglas Hurley and Robert Behnken took part in a dress rehearsal of pre-launch events.  "SpaceX and @NASA completed a full rehearsal of launch day activities with @AstroBehnken and @Astro_Doug ahead of Crew Demo-2," SpaceX said in a tweet.

SpaceX and @NASA completed a full rehearsal of launch day activities with @AstroBehnken and @Astro_Doug ahead of Crew Demo-2 pic.twitter.com/n3B2BBBmnq

In January, SpaceX successfully completed an in-flight test of Crew Dragon’s launch escape capabilities, the official website said. This is not the first that that NASA and SpaceX are engaging in a historic feat. In March 2019, SpaceX had completed Crew Dragon’s first demonstration mission to and from the International Space Station. This made Dragon the first American spacecraft to autonomously dock with the International Space Station and safely return to Earth.

(The above story first appeared on LatestLY on May 25, 2020 02:42 PM IST. For more news and updates on politics, world, sports, entertainment and lifestyle, log on to our website latestly.com).