Since then, a community of researchers and engineers who were involved in this project are paying a tribute to the Opportunity Rover, fondly called as Oppy and mourning its loss. 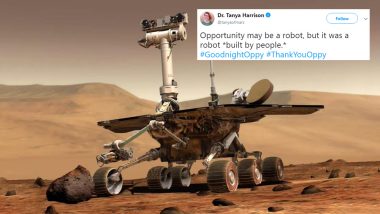 Opportunity Rover, NASA's longest living robot that was the red planet of Mars for more than 12 years has been formally declared dead by the space agency. NASA's Opportunity Rover proved to be of great help in studying more about Mars and was one of the most fruitful missions in the history of space exploration. The robot which lost contact with the space agency in June 2017 was formally declared complete of its task on Wednesday, February 13. Since then, a community of researchers and engineers who were involved in this project are paying a tribute to the Opportunity Rover, fondly called as Oppy and mourning its loss. They are thanking it for helping so much in their research and science. NASA's Curiosity Rover Captures Photos of Mars Dust Storm.

Thomas Zurbuchen, associate administrator of NASA's Science Mission Directorate addressed a news conference in California when he said, "I declare the Opportunity mission as complete." They announced made tried to contact the robot for the last time on Tuesday and couldn't. NASA's Opportunity Rover Might Have 'Died' on Mars.

Check NASA's Announcement About the End of Journey of Opportunity Rover

Today, we're saying #ThanksOppy as the @MarsRovers mission comes to an end. 6 things to know about our record-breaking, discovery-making, marathon-driving rover, which found that ancient Mars was awash in water... and some of the best images it sent back: https://t.co/ZR7pxBP1ZF pic.twitter.com/2L0gzr4WNJ

So while a lot of questions from the earth remain unanswered, the Opportunity Rover had proved itself withstanding through phases of endurance. John Callas, manager of the Mars Exploration Rover Project said, "It is a hard day. Even though it is a machine and we're saying goodbye, it's very hard and it's very poignant."

We asked you to work 90 Martian days and you gave us 15 years.

You confirmed water once existed on #Mars, found the first meteorite on another planet and you showed us a dust devil twisting through a Martian valley.

-Found evidence for water on Mars

Remembering Oppy With Its Work

Clearly Not Just a Robot

Opportunity may be a robot, but it was a robot *built by people.* #GoodnightOppy #ThankYouOppy pic.twitter.com/wnl6UKRNIr

The Opportunity Rover was incredible with its work and it is indeed a thing to wonder how social media is mourning over the loss of a robot. Some of the people also commented on how beautiful it is to see a robot having impacted so many with its wonderful work. The end of the mission has clearly affected the scientists and researchers who worked on it.

(The above story first appeared on LatestLY on Feb 14, 2019 12:12 PM IST. For more news and updates on politics, world, sports, entertainment and lifestyle, log on to our website latestly.com).