Three Tombs Discovered Under Egypt's Great Pyramids, One Dates Back More Than 4,400 Years 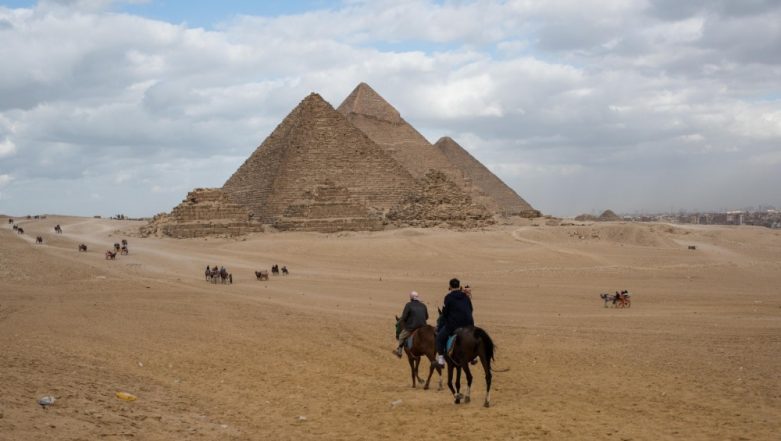 Cairo, May 5: An Egyptian archaeological mission has unearthed three tombs, including one that was shared by two priests over 4,400 years ago, a few kilometres south of the three Great Pyramids of Khufu, Khafre and Menkaure. Egypt's Ministry of State of Antiquities announced the discovery of the tombs belonging to Behnui-Ka and Nwi Who from the fifth dynasty in Giza governorate on Saturday. "At first we thought we were going to find tombs from the late period, but we found a tomb of the fifth dynasty of Ancient Egypt. We are talking about a 4,400-year-old tomb," secretary-general of the Supreme Council of Antiquities and director of the Egyptian Archaeological Mission team Mostafa Waziri told Efe news. Egypt Discovers 4,400-Year-Old Tomb of Ancient High Priest Wahtye (See Pictures)

Waziri explained that the mission kicked off its work in August 2018 and discovered the three tombs after digging through more than 450 cubic meters of rubble. One of those tombs was filled with wooden sarcophagi and well-preserved artefacts of the two priests. Behnui-Ka had seven titles and was the purifier of Pharaoh Khafre, while Nwi Who had five titles, including the priest of Maat who was responsible for justice, and the goddess of justice and truth, according to Egyptian mythology. Mummies of Mice, Cats, Falcons Found in Egyptian Tomb Dating Back to 2000 Years (See Pictures)

The three tombs were showcased to dozens of journalists after a press conference attended by Egypt's Minister of Antiquities, Khaled al-Enani, at the Giza Plateau. The tombs, separated by a few meters, are located under the dunes and behind the limestone doors, an indicator of the priests' power since getting this material required "permission by the king himself", Waziri said. The doors give way to corridors, decorated with hieroglyphic engravings and some intact wooden sarcophagi that have maintained their original colours and currently are being restored inside the tomb itself. Egyptian Archaeologists Discover 50 Mummies at Ancient Burial Site Near Cairo; View Pics.

"The sarcophagi are in perfect condition because they were well-painted, well-coloured and well-decorated. We will exhibit them at our Egyptian museums like the ones in Sharm al-Sheikh and Hurghada," Waziri said after visiting the tomb. Renowned Egyptologist Zahi Hawas, who attended the presentation of the tombs, told Efe news that he was "very happy" because the engravings and the statues could date the tomb back to the 26th Dynasty (664-525 BC), the last one that ruled Egypt before the Persian invasion.