Two New Marsupial Species Discovered in Australia, Know More About the Cousins of Greater Gliders Nestled in the Forests of Queensland & Victoria

The two new mammals are being identified as cousins of the doe-eyed flying marsupials, also known as greater gliders and the furry-bodied subsists on eucalyptus leaves in the forests of Queensland and Victoria. In this article, we will know more about these new species. 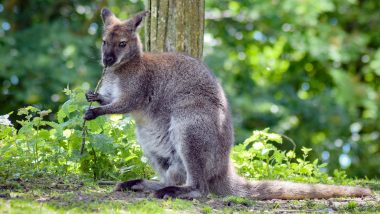 Amid the ongoing pandemic, and wildfires there appears some good news, for the Aussies and animal lovers across the world. Scientists in Australia have made a remarkable discovery, with the help of DNA revealing that one of the country’s adorable airborne marsupials is in fact, three separate species. Yes, you read that, right! After the country experienced disastrous wildfire season, this emerged as a new ray of hope in the forests of Australia’s east coast. According to the researchers, the two new mammals are being identified as cousins of the doe-eyed flying marsupials, also known as greater gliders and the furry-bodied subsists on eucalyptus leaves in the forests of Queensland and Victoria. In this article, we will know more about these new species.

In the study published in Nature’s Scientific Reports Journal, scientists discovered that the treetops are far richer and more diverse than they thought. The already-known southern glider, is reportedly about the size of a common possum and they sleep in hollowed-out trees in the forests of Victoria and New South Wales, during the day and sets out at night in search of eucalyptus leaves. They can even soar up to 330 feet through the air. Australian Koala Goes Viral For Its Seduction Skills, Check Hot Picture of the Marsupial.

“There has been speculation for a while that there was more than one species of greater glider, but now we have proof from the DNA,” PhD candidate, Denise McGregor from James Cook University was quoted saying in reports. McGregor and her team used a genotyping tool called Diversity arrays technology (DArT) to analyse tissue samples taken from more than 50 gliders living in multiple regions in Australia. The result confirmed that there is not just one kind of greater glider, but we have two more. Sex Obsession is Killing Australia’s Marsupials, They Are Now Listed Among the Endangered Species.

The team further stated that the two variants, which initially assumed to be subspecies are actually separate species in their own right. The three distinct species make up three largely different populations along the Australian east coast—Petauroides volans (southern region), Petauroides armillatus (central) and Petauroides minor (north). The newly discovered species, is the smallest of the glider clan, which can grow to nearly two feet.

Australia’s flying marsupials are fascinating, and their large eyes and fluffy ears have endeared people around the world. But the number of the glider population declined over the years, and each of the species represents now even smaller and endangered group.

(The above story first appeared on LatestLY on Nov 09, 2020 01:11 PM IST. For more news and updates on politics, world, sports, entertainment and lifestyle, log on to our website latestly.com).