The upcoming Redmi K40 reportedly will be the first smartphone series from Xiaomi's sub-brand to get Qualcomm Snapdragon 888 SoC. 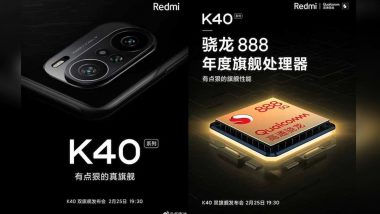 The upcoming Redmi K40 series has been teased online ahead of its official launch by Redmi's General Manager Lu Weibing on Weibo. The company official shared an image of the phone featuring a triple rear camera setup with two large sensors and one small sensor. Moreover, he also confirmed through a separate post that the Redmi K40 will be the first smartphone series from Xiaomi's sub-brand to get Qualcomm Snapdragon 888 SoC. Xiaomi Reportedly Working on Its Car, Project Led by CEO Lei Jun.

The upcoming Redmi K40 Series is expected to comprise of Redmi K40 and Redmi K40 Pro. Since the posts from the company's executive mentioned Redmi K40 series, so it is unclear as of now, which model will get triple rear snapper and Snapdragon 888 SoC. Moreover, the image revealed that the Redmi K40 Series will be launched on February 25 at 7:30 pm local time which is 5 pm IST.

It is important to note that Weibing through a separate post also shared that the Redmi K40 series will be the first Redmi series to feature Snapdragon 888 chipset. Do note, it is still not clear which variant will be offered with the latest Qualcomm SoC. According to a tipster, the Redmi K40 Pro might get the Snapdragon 888 SoC whereas the regular Redmi K40 will be powered by a Snapdragon 870 SoC.

Apart from the chipsets, both the phones reportedly will get 6.81-inch displays with a hole-punch cutout for the selfie camera. Both the phones are expected to come with quad rear camera setups. But, the regular Redmi K40 might get a triple rear camera setup. The Redmi K40 is likely to be backed by a 4,500mAh battery whereas the Redmi K40 Pro might get a slightly bigger 5,000mAh battery.

(The above story first appeared on LatestLY on Feb 19, 2021 08:53 PM IST. For more news and updates on politics, world, sports, entertainment and lifestyle, log on to our website latestly.com).