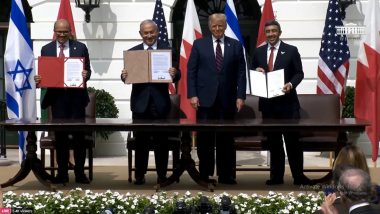 Washington, September 15: Five or six more Middle East countries will sign a peace agreement, said United States President Donald Trump as he hosted the historic Abraham Accords signing event at the White House on Tuesday. Israeli Prime Minister Benjamin Netanyahu said his nation is ready to normalise ties with most of its neighbours barring Iran. Trump Vows Any Attack by Iran to Be Met With '1000 Times Greater Magnitude'.

The  Israel-Bahrain-UAE accords marks a "new dawn for Middle East", Trump said in his opening remarks. "Israel, the United Arab Emirates, and Bahrain will establish embassies, exchange ambassadors, and begin to work together as partners. They are friends," he said.

The era of instability, geopolitical tensions and threats of wars would be history as most Middle East countries would join hands to "improve and secure their futures", the President added.

"We have many nations ready to follow and make peace with Israel," Trump claiming, adding that "at least five or six countries coming along very quickly." Speculations are rife that Kuwait, Oman, Egypt, Jordan and Saudi Arabia are set to normalise their ties with Israel, the historic rival.

Following Trump, Netanyahu told the reporters that the Abraham Accords is a "pivot of history". The peace deal would usher into an era that very few would had imagined, he said, adding that without the fresh approach of President Trump, the signing of peace agreements would not had been possible.

"Assalam Alaikum", Netanyahu said, as he used the Islamic greeting to express the Jew-Muslim unity that would be fostered with the peace accord. He went on to add that the Israel-Palestine conflict would also be resolved in the most amicable manner. "

This agreement will bring peace among all children of Abraham," he said, referring to Prophet Abraham (AS) who is revered by the adherents of Judaism, Christianity and Islam.

UAE’s foreign minister, Abdullah bin Zayed bin Sultan Al Nahyan, also reiterated the message of peace. He claimed that the Abraham Accords will serve as a hope before the world that "peace could be achieved". His Bahraini counterpart also reiterated the sentiment, claiming that the agreement mediated by Trump is based on "trust, respect and willingness for harmony".

(The above story first appeared on LatestLY on Sep 15, 2020 11:01 PM IST. For more news and updates on politics, world, sports, entertainment and lifestyle, log on to our website latestly.com).