Azerbaijan-Turkey-Pakistan: A New Axis of Evil Against Armenia & India

Artsakh historically has always been part of Armenia, and when the region was annexed to Persian and Arab rule, Artsakh (later known as Nagorno-Karabakh), was governed by Armenian nobility. 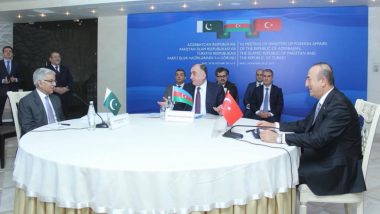 The roots of the conflict in Artsakh

Artsakh historically has always been part of Armenia, and when the region was annexed to Persian and Arab rule, Artsakh (later known as Nagorno-Karabakh), was governed by Armenian nobility.

Following the collapse of the Russian Empire during World War I, Transcaucasia became the stage of wars between various countries over territories. In 1918, the Ottomans led by Enver Pasha, formed the "Army of Islam" in the Caucasus in order to continue their genocide against the Armenians and build a land bridge with other Turkic nations to create a Pan-Turkic empire stretching from Turkey to Central Asia and beyond.

The geography of Armenia, located at the center of the Turkic people has always been an obstacle to Turkey's expansionist dream of unifying the Turkic nations. In 1921 as the Bolsheviks consolidated their power in South Caucasus, Joseph Stalin formally transferred the Armenian-populated highlands of Artsakh (Nagorno-Karabakh) to Soviet Azerbaijan to try to placate Turkey.

The declaration was rejected by the newly independent Azerbaijan, leading to the Nagorno-Karabakh War from 20 February 1988 to 12 May 1994, resulting in a ceasefire in May 1994 with the defeat of Azerbaijan and the de facto independence of the Republic of Artsakh. Today, Artsakh is a semi-presidential democracy and has permanent diplomatic missions in Armenia, Australia, France, Germany, Russia, the United States, and one for Middle East countries based in Beirut.

Artsakh Armenians have shown to the world that a nation's will for freedom and liberation is costly but not impossible. However, Azerbaijan continued its enmity and racist announcement against the Armenians. To consolidate its power and arm itself, Baku had engaged in strategic relations with both Turkey and Pakistan.

Turkey has been assisting Pakistanwhen it comes to Kashmir, and Islamabad returns the favor by pledging support to Turkey in its aggressive policies in South Caucasus and Western Asia.

During his speech in the United Nations General Assembly, Turkish President Raceb Tayyib Erdogan told that the Kashmir "conflict" must be mentioned and it is a "burning issue" that threatens the stability in the region. "We are in favor of solving this issue through dialogue within the framework of the UN resolutions and especially in line with the expectations of the people of Kashmir" Erdogan added.

Coming to Azerbaijan, Pakistan was among the first states to recognize Azerbaijan's independence in 1991 and since then is the only country that has not established diplomatic relations with Armenia. In 2003, a defense agreement was signed between Baku and Islamabad which allows Azerbaijani military staff, in particular special force units, to take part in annual military drills along with Pakistani armed forces.

The main reason driving Pakistan-Azerbaijan politico-military cooperation in Baku's enmity to Yerevan over the crisis over Artsakh. When it comes to Kashmir, President Ilham Aliyev stated during his meeting with the then PM of Pakistan Nawaz Sharif in October 2016; "Azerbaijan fully supports the settlement of the Kashmir problem based on the relevant resolutions of the UN Security Council". (The Diplomat, 13/1/2017). There is no doubt that Pakistan will try to make additional inroads into the defense market of Azerbaijan, as Islamabad is trying to search for partners to counter India in the UN.

Meanwhile, according to FreeNews.am, as per a telephonic conversation between two locals in the bordering region near Artsakh, it was reported that two Azerbaijanis mentioned about the presence of Pakistanis in the territory. In Baku, Azerbaijanis raised Pakistan's flags "in gratitude for Pakistan's support to Azerbaijan in its war against Armenia". This would not be surprising as Pakistani and Afghani "Mujahideens" were recruited in the Azerbaijani army during the Artsakh (Nagorno-Karabakh) liberation war (1990-1994) waged by Artsakh Armenians against Azerbaijan.

How India and Armenia can balance the Ankara-Baku-Islamabad axis?

Both Armenia and India have a mutual concern about the growing partnership between Turkey, Azerbaijan, and Pakistan. Islamabad being backed by its two partners tried to consolidate its position on Kashmar while Baku does the same over Artsakh. Moreover, the Pan-Turkic aspirations of both Ankara and Baku should concern the Hindus in India. Ankara employes a pan-Islamic and Pan-Turkic dream to unify all the Turkic nations and expands its influence over Central Asia, something that threatens India's national security and territorial integrity.

Simultaneously, Armenia should develop a strategic partnership with India. On various occasions Prime Minister of Armenia, Nikol Pashinian declared that Armenia fully defends India's position on the Kashmir (News.am, 27/9/2020). In September 2019, Pashinyan had a meeting at UNGA session with his Indian counterpart, PM Narendra Modi and both reaffirmed to strengthen the economic and political ties between the two countries. To strengthen the military ties, in March 2020, India and Armenia signed a $40 million worth deal for the sale of four Swathi weapon locating radar (WLR) stations.

A WLR is designed to detect the trajectory of an artillery shell. Using the detected path, one can narrow down on an enemy artillery firebase, and direct return fire to successfully destroy it. (Delhidefencereview, 29/3/2019). Moreover, the Yerevan City Council approved a proposal in April to install a statue of Indian independence hero Mahatma Gandhi in the Armenian capital (Panorama.am, 28/4/2020).

When I was in New Delhi, in Febrauary 2020, in my speech at the international conference "Human Rights: National and International Issues and Challenges" I have stated that in order to balance the Turkish-Azerbaijani-Pakistani axis, Armenia and India must enhance strategic and security relationships and coordinate in international forums. Both are beeing threatened by Turkey's expansionist policies and are eager to contain it. There is a fear that Turkey with Pakistan's help may send Syrian mercenaries to Kashmir and engage in terror activities. Moreover, given Pakistan's assistance to Baku, some Armenian lawmakers are moving to condemn Pakistan's policy on Kashmir. This can be a historical moment if the Indian parliament moves forward and recognizes the Armenian Genocide in the Ottoman Turkish Empire.

(The above story first appeared on LatestLY on Oct 21, 2020 10:11 AM IST. For more news and updates on politics, world, sports, entertainment and lifestyle, log on to our website latestly.com).