Bangladesh State Minister for Disaster Management and Relief Md Enamur Rahman said that at least 23 districts were predicted to experience a second wave of floods with the rise of water levels in major rivers due to heavy rains. 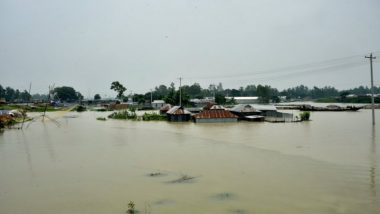 Dhaka, July 13: Bangladesh State Minister for Disaster Management and Relief Md Enamur Rahman said that at least 23 districts were predicted to experience a second wave of floods with the rise of water levels in major rivers due to heavy rains.

According to the Minister, Bangladesh had earlier witnessed a short-term floods between June 26 and July 7.

During this period, "13,09,150 people were affected due to the floods in 15 districts (out of the country's total 64 districts)", a daily disaster situation report prepared by the country's National Disaster Response Coordination Centre (NDRCC) revealed on Sunday.

Officials said floods triggered by heavy seasonal rains and onrush of water from hills across the Indian borders have worsened again last week.

Meanwhile, Md Arifuzzaman Bhuiyan, Bangladesh Water Development Board (BWDB) executive engineer, said the second wave of floods may sustain for over 15-20 days as water levels of all three major river basins are set to rise this week.

According to the country's Flood Forecasting and Warning Centre (FFWC), water levels of two major rivers -- Brahmaputra-Jamuna - may cross their danger marks at major points after Sunday and the water levels may reach at their peak on July 17.

Apart from this, it said water levels of the other major Padma river is likely to reach its peak on July 19.

Millions of people in Bangladesh suffer from flooding as the low-lying country experiences seasonal floods almost every year this month.

TV reports showed Sunday that floods have caused widespread damage to habitation, crops, roads and highways across vast swathes of the country.

Against this backdrop, Prime Minister Sheikh Hasina asked officials to remain alert to tackle floods which comes amid the ongoing COVID-19 pandemic.

One of the worst-affected countries in South Asia, Bangladesh has so far registered 183,795 coronavirus cases, with 2,352 deaths.

(The above story first appeared on LatestLY on Jul 13, 2020 10:15 AM IST. For more news and updates on politics, world, sports, entertainment and lifestyle, log on to our website latestly.com).