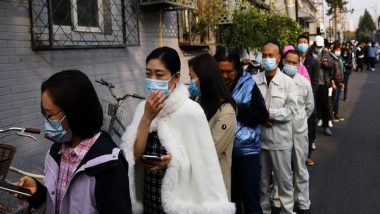 Five residents reported to Erenhot City's epidemic prevention and control work team about having received goods they had bought from Mongolia. The packages were then sent for nucleic acid testing, and returned positive results. Chinese Authorities Force Young Monks To Leave Monasteries, Go Back Home in Qinghai Province.

The city's health authority urged local residents to stop buying items from abroad with high infection risks in light of pressure from imported coronavirus cases, the report said. The notice also asked those who have received goods from high risk countries since September 15 to report to local authorities for proper disposal.

Since the latest epidemic outbreak, the province has registered a total of 163 domestically transmitted cases by Wednesday, with 14 in Erenhot city and 144 in the China-Mongolia border city of Ejin Banner, which experts believe could be the source of the virus in the latest epidemic surge.

The Chinese mainland reported another 87 new local cases on Wednesday, bringing the total to over 700 in just half a month since the first local confirmed cases were found in Xi'an in northwest China's Shaanxi Province. Among the confirmed cases, 497 of the infected have direct or indirect links with the epidemic in Inner Mongolia or neighbouring northwest China's Gansu Province.

(The above story first appeared on LatestLY on Nov 05, 2021 11:33 PM IST. For more news and updates on politics, world, sports, entertainment and lifestyle, log on to our website latestly.com).