Fourth of July 2020: Joe Biden, US Presidential Candidate, Says Wearing Mask 'Most Patriotic Thing to Do' 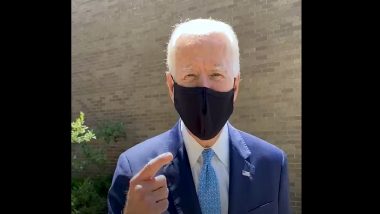 Washington, July 4: Joe Biden, the Democratic Party's candidate for upcoming US presidential elections 2020, took a swipe against his rival and incumbent head of state - Donald Trump - over the use of face mask. In a one-liner on social media, Biden said wearing a face mask is most patriotic act on Fourth of July 2020.

"This Fourth of July, one of the most patriotic things you can do is wear a mask," Biden said. His remark came hours after Trump, while addressing a rally in Mt Rushmore in South Dakota to kickoff Independence Day celebrations, was seen without a face mask despite the raging transmission of COVID-19.

This Fourth of July, one of the most patriotic things you can do is wear a mask.

The Fourth of July commemoration is one of the biggest annual national event in the US. The day, this year, marks 244 years since the American colonies were officially freed from the British colonial rule.

Biden, according to recent surveys, enjoys nearly a 10 percentage-point lead against Trump ahead of the November elections. The former Vice President, considered the closest aide of Barack Obama, received the backing of Afro-American voters which powered his victory against Bernie Sanders in the Democratic Primaries.

The alleged mishandling of coronavirus pandemic by the Trump administration - with cases rising exponentially on daily basis - and the economic fallout of the virus outbreak has further bolstered his chances of beating Trump in the race to the White House later this year.

(The above story first appeared on LatestLY on Jul 05, 2020 12:18 AM IST. For more news and updates on politics, world, sports, entertainment and lifestyle, log on to our website latestly.com).