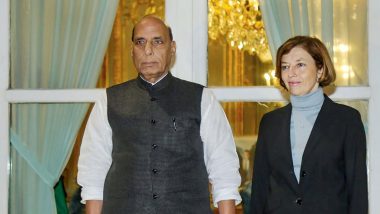 Paris/New Delhi, June 30: French Defence Minister Florence Parly on Monday wrote to her Indian counterpart Rajnath Singh, and condoled the death of 20 Indian soldiers in Galwan Valley. In her letter, Parly even recalled that India is France's strategic partner in the region. Parly even expressed her steadfast and friendly support to India, along with that of French armed forces.

Extending France's support to India, Parly in he letter wrote, as quoted by news agency ANI, "This was a hard blow against soldiers, their families,& the nation. In these difficult circumstances, I wish to express my steadfast and friendly support, along with that of French armed forces." Indian Air Force Likely to Receive First Batch of Six Rafale Fighter Jets by July 27.

"This was a hard blow against soldiers, their families,& the nation. In these difficult circumstances, I wish to express my steadfast & friendly support, along with that of French armed forces," wrote French Defence Minister Florence Parly to her Indian counterpart Rajnath Singh

Adding more, the French Defence Minister also expressed her readiness to meet Indian Defence Minister Rajnath Singh in India and follow up on the ongoing discussions. Earlier in June, Singh held telephonic conversations with French Minister of Armed Forces. During the conversation, Singh and Parly discussed on timely delivery of Rafale Aircraft despite the challenges posed by the COVID-19 pandemic.

As per various reports, India is most likely to get around six fully-loaded Rafale fighter aircraft by July-end, fitted with the long-range Meteor air to air missiles. Earlier, In September 2016, India had signed an inter-governmental agreement with France for procurement of 36 Rafale fighter jets at a cost of around Rs 58,000 crore.

(The above story first appeared on LatestLY on Jun 30, 2020 12:42 PM IST. For more news and updates on politics, world, sports, entertainment and lifestyle, log on to our website latestly.com).