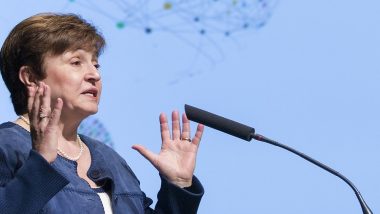 "I believe there are three areas where the finance ministers and central bank governors can make progress in providing more certainty about future actions during the G20 meetings in Saudi Arabia: Trade, Climate, and Inequality," Georgieva said in a blog post prior to the upcoming G20 meetings scheduled later this week, the Xinhua news agency reported.

The IMF chief noted that the China-US phase-one economic and trade agreement eliminated some of the immediate negative consequences for global growth, but the world still needs a modern global trading system that can unleash the full potential of services and e-commerce while protecting intellectual property rights.

"Tackling trade is only a start. The global economy will continue to encounter major shocks if we fail to address another urgent global challenge: climate change," Georgieva said.

IMF estimates show that a typical climate-related natural disaster reduces growth by an average of 0.4 percentage points in the affected country in the year of the event, she added.

As income and wealth inequalities remain persistently high across many of the G20 economies, Georgieva called on G20 ministers to put a renewed focus on raising living standards and creating better-pay jobs.

"The IMF, in collaboration with the World Bank, is identifying key areas where access to opportunities can be increased, in particular, investing in high-quality education, R&D, and digitalization," she said.

In a G20 surveillance note released Wednesday, the IMF said that global growth "appears to be bottoming out", but the projected recovery is fragile.

"Working together, we can take the necessary steps to reduce uncertainty and put the global economy on more solid footing," Georgieva said.

(The above story first appeared on LatestLY on Feb 20, 2020 08:43 AM IST. For more news and updates on politics, world, sports, entertainment and lifestyle, log on to our website latestly.com).