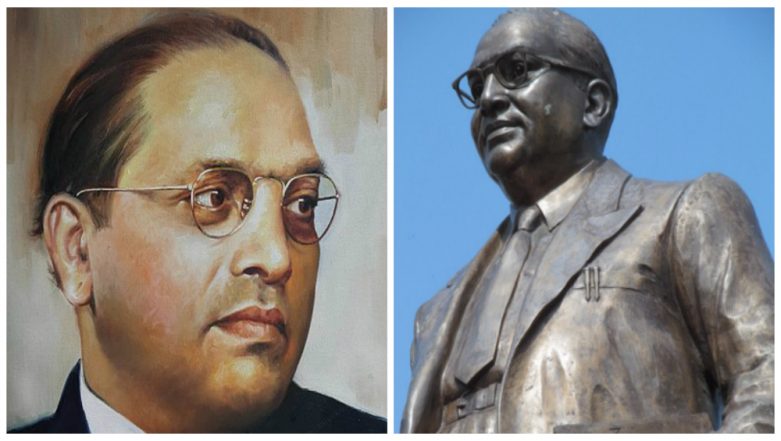 London, August 21: The Indian government has lodged an appeal against a local UK council's attempt to close down a memorial dedicated to Bhimrao Ambedkar in north London, inaugurated by Prime Minister Narendra Modi during his visit to the UK in November 2015. Ambedkar House, at 10 King Henry's Road in north London where the architect of the Indian Constitution and Dalit rights activist lived in 1921-22 during his student days at London School of Economics (LSE), is housed within a four-storey residential property.

Camden Council, the local authority, recently rejected an application filed by the Indian authorities to convert the residential property into an official museum/memorial. “The four-storey property does not have permission to be used as a museum and must be returned to residential use,” notes the Camden Council officer's report in reference to the planning application made by the Indian authorities. Ambedkar Jayanti 2019: Top Quotes To Remember Dr BR Ambedkar On His 128th Birth Anniversary.

“In terms of balancing the loss of residential floor space against the cultural benefits, there is nothing to suggest that an alternative site could not be found – Dr Ambedkar lived there for a comparatively short time,” it adds. The council agrees that a provision for a museum would be within its planning policy, but it was being refused because that would cause a loss of residential floor space.

The Indian High Commission in London, which had been involved in the original acquisition of the estimated GBP 3.1-million property on behalf of the Maharashtra government in 2015, has engaged Singhania & Co solicitors to appeal against the decision before an Independent Planning Inquiry panel. “We do believe there are strong grounds for appeal,” said Ravindra Kumar, the lawyer from the UK-based legal firm handling the appeal, which is scheduled for September 24.

The Indian side argues that the home holds special significance for a huge section of Indians in the UK and outside because it was where Ambedkar lived during a crucial formative period in his academic life. The deep association it holds with the Indian community makes it more than just a residential property and a heritage worth preserving for future generations, said one Indian official familiar with the case.

“This property also has the distinction of being recognised as an English Heritage since 1991 and carries a blue plaque with the words Dr Bhimjirao Ramji Ambedkar 1891-1956, Indian Crusader for social justice lived here.

This property, therefore, has historic significance for all his followers and admirers, not only in India but all over the world,” Rajkumar Badole, Maharashtra's minister of social justice and special assistance, had said at the time of the museum's launch in 2015.

The home was bought by the state government and refurbished to transform into a memorial, which now houses some photographs and belongings of Ambedkar, with the walls adorned with his famous quotations. The 10 King Henry's Road townhouse on a leafy street in Chalk Farm area of north London had gone up for sale in 2014. London-based Federation of Ambedkarite and Buddhist Organisations (FABO) UK had written to the Indian government to purchase the property as a historically relevant monument and make it a “focal point to spread Dr Ambedkar's message about equality, human rights and social justice”.

The decision for Maharashtra to purchase the home was cleared by chief minister Devendra Fadnavis and the state Cabinet gave its final nod to the proposal in February 2015 and it became one of the focal points of Prime Minister Narendra Modi's visit to the UK in November 2015. However, according to details of the planning application, the local residents are not entirely pleased with the attention attracted by the home on what is a quiet residential street.

“Number of visitors is harmful to neighbouring amenity: the number of visitors to the property has increased 100 per cent they arrive in coach loads taking photos and making a noise,” notes an objection from one of the neighbours on the street.

“The blue plaque has been there for some time but we never had these amount of visitors and we are now disturbed by the noise day and night seven days a week. I often have my grandchildren staying and they have been disturbed on numerous occasions,” adds the objection.

However, the Indian stand is that there have been no disruptive activities undertaken at the site and all visitors to the property visit to pay their respects, rather than be disruptive.