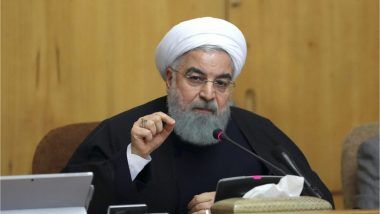 Tehran, September 20: Iran dismissed US efforts to restore all UN sanctions on the country as mounting economic pressure from Washington pushed the local currency down to its lowest level ever on Sunday. Iran's currency dropped to 272,500 to the US dollar at money exchange shops across Tehran.

The rial has lost more than 30% of its value to the dollar since June as sweeping US sanctions on Iran continue to crush its ability to sell oil globally.

Iran's currency was at 32,000 rials to the dollar at the time of Tehran's 2015 nuclear deal with world powers, which was signed by the Obama administration but which the Trump administration pulled the US from. US Demands Restoration of UN Sanctions Against Iran, Says Donald Trump.

As the currency plummeted, Iran's foreign ministry spokesman Saeed Khatibzadeh slammed the Trump administration's declaration Saturday that all UN sanctions against Iran have been reimposed because Tehran is not complying with the nuclear deal.

The US move has been rejected as illegal by most of the rest of the world and sets the stage for an ugly showdown at the world body ahead of its annual General Assembly this week.

Even before the US declaration, other Security Council members had vowed to ignore it. They say the US lost legal standing to invoke snapback sanctions when President Donald Trump withdrew from the nuclear deal in 2018 and began reimposing US sanctions on Iran.

The Iranian government spokesman said the snapback sanctions have only happened in “the fantastical world” of the Trump administration. He said the US stands on the wrong side of history.

"They are attempting to make everyone believe it, but nobody is buying it except for themselves,” Khatibzadeh said during his weekly press briefing on Sunday.

“It is a television show whose sole presenter, viewers and those cheering it on are Mr Pompeo himself and a handful of others,” the spokesman said, referring to the US secretary of state. “Tehran's message to Washington is clear: return to the international community, return to your commitments and stop bullying so the international community will accept you," he added.

The White House plans to issue an executive order on Monday spelling out how the US will enforce the restored sanctions, and the State and Treasury departments are expected to outline how foreign individuals and businesses will be penalised for violations.

Tensions are running high between Iran and the US, particularly since a US strike in January killed Iranian Revolutionary Guard General Qassem Soleimani in Baghdad, prompting Tehran to retaliate with a ballistic missile strike on Iraqi bases housing American troops.