Gosiame Thamara Sithole, 37, has claimed to have given birth to ten babies – seven boys and three girls. 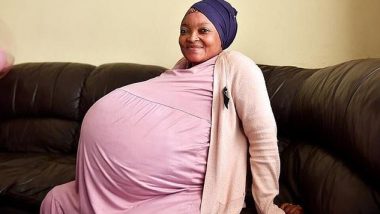 Pretoria, June 8: Gosiame Thamara Sithole, 37, has claimed to have given birth to ten babies – seven boys and three girls. According to her husband Tebogo Tsotetsi, the babies were delivered by a caesarean section surgery at a hospital in Pretoria on June 7.

This will set a new world record for the largest-ever live births if doctors confirm it. The development comes a month after a woman named Halima Cisse from Mali gave birth to nine babies in Morocco.  It's Nonuplets! Malian Woman Gives Birth to Nine Babies in Morocco.

EXCLUSIVE: A Gauteng woman has given birth to 10 babies, breaking the Guinness World Record held by Malian Halima Cissé who gave birth to nine children in Morocco last month.https://t.co/YwXvpbpP6p

She was a state of disbelief when the doctors told her earlier that she was expecting six children before further scans showed that it was in fact octuplets. wo others could not be detected initially because they were inside the wrong tube, Sithole said.

Professor Dini Mawela, the deputy head at the Sefako Makgatho Health Sciences University, said Sithole’s case was rare and usually caused by fertility treatments. She said that the causes of such pregnancies were “either nature or somebody who was having fertility treatment”.

Sithole has broken the record of most children born at the same birth held by Cissé, who gave birth to nine children (nonuplets) at a hospital in Morocco last month.

(The above story first appeared on LatestLY on Jun 09, 2021 10:02 AM IST. For more news and updates on politics, world, sports, entertainment and lifestyle, log on to our website latestly.com).