The project will begin on the Ueno to Omiya line, where passengers take 30-minute sharp for commutation. 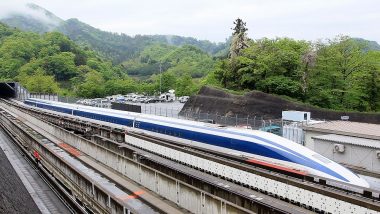 Tokyo, July 9: Known for building the best railway grid in the world, Japan is now investing in a two-year project which will save one minute on a single train route. Though the benefit seems to be marginal, the East Japan Railway Company - the nodal authority to implement the project - claims hundreds of passengers will be benefited if even if the journey duration gets slashed by 60 seconds.

The project will be undertaken on the Ueno to Omiya line, where passengers take 30-minute sharp for commutation. At present, the train speed at the route is restricted to 110 km per hour.

The railway authority wants to increase the speed to 130 km per hour, which would conclude the journey in 29 minutes. Although the move was being planned for nearly a decade, the neighbourhoods along the route had marked their apprehensions claiming the escalated speed will cause additional vibration causing inconvenience to them.

East Japan Railway now claims to have found the solution to the residents' concerns. The company aims to instal additional sound absorbing panel, which will keep the vibration in check despite the speed being increased by 20 km per hour.

The dedication showed by the Japan railways to resolve a decade-long issue, whose benefit at maximum would be to save a minute of commuters' time, is likely to be appreciated across the globe. The country is already considered a leader when it comes to the tracks. Most among the third-world are seeking Tokyo's assistance for laying down high-speed rail network, akin to the highly successful bullet trains in Japan.

In 2017, India tied up with Japan to build a high-speed rail line between Mumbai and Ahmedabad -- the top two commercial cities in the western part of the nation.

(The above story first appeared on LatestLY on Jul 09, 2018 11:59 PM IST. For more news and updates on politics, world, sports, entertainment and lifestyle, log on to our website latestly.com).